A retired cat burglar, ageism, subtle romance and buddy humour are all set to grace the big screen this March alongside some electronic help as the highly acclaimed caper Frank and Robot arrives in cinemas following some extremely positive word of mouth upon its initial release Stateside.

Set somewhere in the near future and revolving around retired jewel thief Frank (Frank Langella), the one time burglar has become estranged from his daughter (Liv Tyler) whilst his highly successful son (James Marsden) attempts to care for his aging Father from afar by purchasing the latest in a line of electronic butlers.

Discovering a new lease of life whilst continuing a subtly flirtatious friendship with local librarian Jennifer (Susan Sarandon), the retired thief finds that his newfound electronic help would also make for the most perfect partner in crime.

But not even this newfound friendship and some illegal escapades can disguise the fact that Frank and his health are continuing to deteriorate.

Newcomer Jake Schreier has previously cut his teeth as a rock musician prior to turning his hand to directing whilst writer Christopher D. Ford has penned mainly for television, the revelation is that Robot and Frank promises to deliver more charm, humour and subtlety than several months of blockbusters and highly prolific releases combined together.

With the addition of veteran Langella on board, the production has seemingly ensured that this strange odd couple story focusing on the buddy relationship between an old thief and his microchipped domestic help avoids descending into the overly sickly sentimentality displayed by the majority of feelgood movies.

Coming across like a mishmash between the pint sized bumbling pal Twiki from Buck Rogers in the 25th Century and the sophistication of the ultimate command base computer Gerty from Moon, the robot at the centre of events seemingly feels simplistic in design whilst retaining a highly stylised retro design that focuses on character rather than visuals and is further enhanced by the stylishly rendered vocal tones of Peter Sarsgaard.

The often dry wit and subtle reasoning that have come to characterise Langella as a firm favourite amongst cinephiles seems nicely counterbalanced by the logically straight laced electric friend whilst the trailer also indicates that the emotional subplot concerning dementia and ageism will be treated both intelligently and deftly.

With a stylish supporting cast featuring the talents of James Marsden and Liv Tyler not to mention the ever excellent Susan Sarandon as a possible romantic interest, hopes are high that Robot and Frank will deliver something very special indeed.

Robot and Frank is released in UK cinemas 8th March 2013. 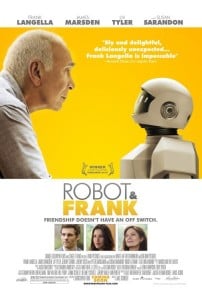 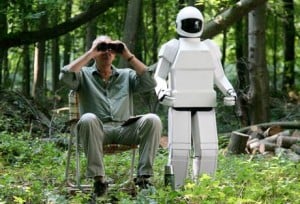 Swizz Beatz Presents No Commission: Art Performs in The Bronx