"The rally in equity markets continues with the MSCI World index reaching new highs in June. However, the strength of equities against a backdrop of falling bond yields and elevated political uncertainty has raised the question as to whether investors are becoming complacent.

"Evidence of such can be found in the behaviour of the VIX index, often referred to as the 'fear gauge', which has recently touched new lows. The move is particularly surprising given that the US Federal Reserve (the Fed) has just hiked rates for the second time this year and is signalling another move in September, as well as balance sheet reduction (see chart below). 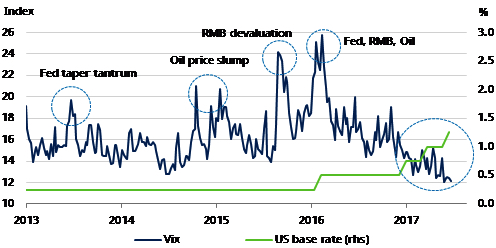 "We would note that although the VIX is low, markets are not entirely ignoring the risks as is often claimed. Gold, which is often seen as the ultimate safe haven asset, has performed well this year (see above). In equity markets there has been a rotation away from the cyclicals, which benefitted from the Trump reflation trade, and back toward the high quality dividend payers.

"These moves are consistent with lower rates and the bull flattening of the yield curve. The surge in technology stocks also reflects strong liquidity and a preference for stocks which can increase earnings when top line growth is scarce.

"Until recently Fed tightening has been associated with increased, rather than decreased volatility. For example, the VIX index spiked after the first move in Fed funds in December 2015 and again during the taper tantrum of 2013, when the Fed signalled an end to quantitative easing.

"Other factors have also played a role in driving volatility. Prior to the Fed tightening in 2015, concerns that China would significantly devalue the RMB sent the VIX higher in August of that year. Along with worries over Fed tightening, those concerns resurfaced in January 2016.

"Another key factor has been the oil price. Sharp falls in the oil price in 2014, 2015 and again in 2016 caused volatility to soar as investors feared an increase in defaults in the energy sector.

"From this perspective it could be argued that volatility is low because investors are now comfortable with the Fed's tightening policy, China has clarified its position on the RMB and the oil price is more stable.

"We would add that the current low level of volatility today also owes something to favourable political outcomes in Europe where there has been no swing toward populism. We still have to negotiate the German and Italian elections, but so far voters on the continent have chosen not to join the UK in leaving the European Union."