Are we addicted to crises?

For the first time in a few years, I returned from holiday at the end of last week to find the global economy in broadly better shape than when I left. US GDP data were a little weaker, overall, than hoped for – but given the substantial back revisions to the data, interpreting much of a signal is hard. Certainly the latest payrolls data seem to suggest that the recovery is gathering pace pretty much as hoped for. In China, growth is definitely slowing. But some of the more dire claims about activity there look a bit more like scaremongering, given better recent short-term data.

The even better news was in Europe, where the euro area economy actually managed to grow in the second quarter. Yes, it was driven by France and especially Germany, and yes, Italy and Spain still saw contractions. But those declines were much smaller than six months ago, bolstering hopes that even these economies will limp back to growth next year.

Despite this unashamedly good news, much of the media reporting seems to me to have been somewhat skewed. It is almost as if journalists are busy scouting around for the next crisis or big risk to the global economy. So we have had stories about India’s collapse (yes, it has a balance of payments problem, but also exchange rate flexibility), Greece’s possible new bailout (yes, but it’s small and we already knew it would need more) and even, amazingly, Vietnam being the next China.

The big economic news story of the year, however, is still all about the US Federal Reserve. With the US economy now definitely improving – and with proper growth, even the deficit is going down – the central bank has started to muse about when it will stop buying financial assets and (eventually) raise interest rates. Because financial markets are forward-looking and nearly always too excitable, we’ve already seen some reaction in bond yields and currencies, which incidentally is part of India’s problem. But while the Fed has taken a clear and very sensible approach towards any normalisation of monetary policy, the media is getting itself into more of a lather. 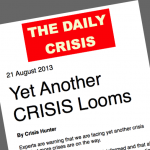 This all makes me a bit concerned that we are now addicted to crises. No-one should have really expected US interest rates to stay near zero for ever – there was always likely to be some normalisation, given that advanced economies have avoided the deflationary trap that Japan fell into. And any tightening in policy still looks some way off; technically, a reduction in the pace of asset purchases just means less extra stimulus, not an outright tightening. There are of course risks that the economy might stutter again, which is why the Fed has been at pains to spell out the conditional nature of its future decisions. But somehow, all this gets lost with journalists keen to grab our attention and focus on the scarier side of the story.

So here’s my boring, factual summary of recent developments. The world economy is in better shape than we thought. Downside risks remain, sure – and the euro crisis is still the biggest of these. But, compared with where we were six or nine months ago, the global economy is definitely making progress. Cautious optimism is the best attitude right now.