Argentina Beefs up its Military

With just a few months to go before drilling for oil gets seriously underway off the Falkland Islands in Rockhopper’s Sea Lion field, The Argentine president, Cristina ­Fernandez de ­Kirchner, has decided to spend £3 billion on upgrading the country’s armed forces.

That will be an increase of 33.4 percent this year, the largest rise in defence spending Argentina has ever made.

While the Argentine economy lies in the doldrums de Kirchner is not only buying tanks and jet fighters she has also appointed a cabinet post of ‘Secretary for the Malvinas’.

Israeli air defence systems, assault craft, rockets, helicopters and even drones are on the country’s shopping list, as well as new commando and special forces capabilities.

Britain’s military commanders are said to be ‘carefully monitoring’ the situation.

But Admiral Lord West, who commanded HMS Ardent when she was sunk in the 1982 Falklands conflict and is now a Labour peer, expressed concerns that, without the availability of properly equipped aircraft carriers until 2020, Argentina now had a window of opportunity.

This should be a worrying development given Argentina’s recent policy of harassing innocent merchant vessels that fly the Red Ensign and threatening companies that are involved in oil exploration off of the Falkland Islands. 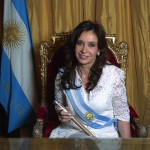 But why would the government of a country with such desperate financial problems decide to spend precious resources on refurbishing its military when there is no obvious threat to them? Other than to ratchet up the noise, or worse?

Argentina constitutes an increased threat to the Falkland Islanders and those operating in the island's economic zone, given recent rhetoric and now this military spending spree.

Some people in the UK would argue that the UK should just hand over the keys to Port Stanley and walk away as we could use the money we spend defending the Falklands on people in the UK. But this sort of talk comes from people who are secure in the knowledge that they will never be dispossessed of their land and heritage.

The UK government now needs to send a deterring message to the Argentine government, as deterrence is far better than the danger of conflict. And talk and spin are not deterrence, a well equipped military with the right personnel is – that costs money and we could find some of that by immediately stopping the aid we send to Argentina.