First we hear that there are going to be significant defence cuts presumably putting some troops onto the labour market, then we hear of a nice little wheeze to use ex-army NCOs to control thugs on community service.

The logic being, according to an Express exclusive, that as the ex-NCOs will have a pension they might want to deal with these scum while being paid the minimum wage and also that they have experience in combat and knocking young teenagers into shape.

It has also been put forward as thugs in community service are being targeted in retribution drive-by shootings.!

This must be the daftest idea I've heard all month!

The youngsters the NCOs deal with have joined a volunteer army. They start with someone who has respect for themselves and others as well as a willingness to submit to military control for the greater good. When in operations they can rely totally on those around them and also have the full authority to use whatever force is necessary.

Controlling a bunch of thugs with no respect at all to start with will not be what they are trained in doing. Maybe back in the 1950s when conscripts could be dealt with as seen fit by those in charge, including a quick 'conversation' behind the drill shed. This is especially so now that they would be completely hamstrung by the law which would rather arrest them than the thug should the ex-soldier have to 'deal' with a situation.

But if they're going to put a lot of military people in the work queue I suppose they need to offer them something. 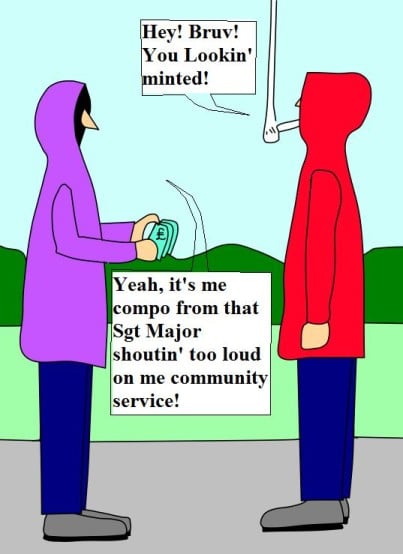