As the centenary of the Great War approaches, the Association of Investment Companies (AIC) has taken a timely look at the investment companies that have been around for a hundred years or longer.

Some 26 AIC member companies were established before 1914 and are still around today, currently representing some £25.5billion between them. This equals almost a quarter (23%) of the investment company industry’s £114.5bn assets under management, illustrating both the long-term success and the durability of the closed-ended sector.

‘As tough as ox hide’

John Newlands, Head of Investment Companies Research at Brewin Dolphin Ltd and author of ‘Put not your trust in money’, a history of the sector, said: “Having studied a number of the long-lived trusts in historical detail, I have been struck by the way that they have proved robust enough to survive every crash and global conflict in history and then move forward again. A minority of others fell by the wayside, of course. But I am convinced that by investing in a spread of quality companies, each one of which has been closely scrutinised prior to purchase, the enduring trusts have created portfolios that are as tough as ox hide.  This is a message that is forgotten in the good times but is worth reminding investors when sentiment is at low ebb.”

The Alliance Trust was launched in 1888. Katherine Garrett-Cox, Chief Executive of Alliance Trust, said: “Companies survive and grow because they understand the needs of their customers and their shareholders and can adapt to meet these needs as they change over time. Alliance Trust epitomises this ability to provide a product that has remained relevant to shareholders for generations. In order to do so, we have successfully identified and mitigated threats and we have not been afraid to make strategic changes when the need arose. We also never forget that the assets we manage belong to our shareholders, some of whom are descended from our original investors in 1888, and it is in their interests that we work to create long-term value through the investment decisions we make.

“When the company was founded, it was a mortgage bank; borrowing money from investors in the UK and lending it to pioneer farmers in the north western United States, in places such as Oregon and Washington State. In the intervening 126 years, at various times Alliance Trust has been predominantly invested in mortgages, land, bonds and now equities and during that time we have survived wars, recessions, depressions, crashes and hyperinflation. Today we are one of the largest investment trusts in the UK, with a concentrated portfolio of global equities which delivers a combination of capital growth and a consistently growing income. Throughout this time, we have striven to think creatively about how best to serve our shareholders to ensure that we continue to live up to our motto of ‘investing for generations’.”

Garrett Fish, Manager of JPMorgan American Investment Trust, which was launched in 1881, said: “JPMorgan American Investment Trust has benefitted over the long-term from its actively managed exposure to the broadly diversified US equity market. Our outperformance of the S+P 500 over the last decade has stemmed in part from the Trust’s wide investment mandate, to search out and invest in the best companies which are attractive from a valuation standpoint. The dynamic nature of the US economy has continued to attract capital as new and existing companies grow their businesses, invest in new technologies and generate attractive returns. The trust remains relevant in providing investors with a gateway to this marketplace and has successfully demonstrated its resilience across market cycles.”

Ian Sayers, Director General, AIC, said: “It is a testament to the sector that 26 investment companies have been around for over a hundred years, and some for a great deal longer. The industry has weathered world wars, depressions and other booms and busts, and still continues to deliver excellent value to shareholders.  We all know investing is for the long-term: it doesn’t get much longer-term than this.” 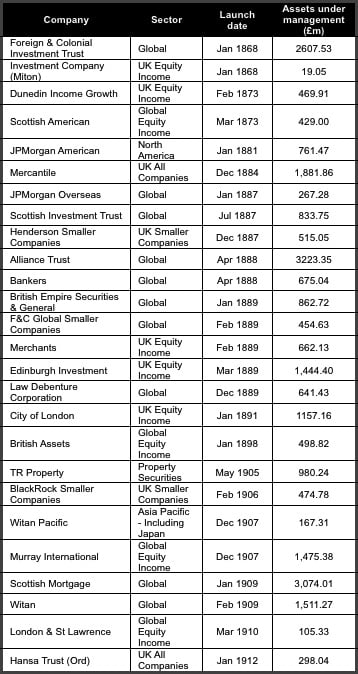 A brief history of the investment company sector

• The first investment company, Foreign & Colonial, was formed in 1868, the same year as the last public execution in Britain. The trust’s aim was to help the ‘investor of moderate means’ have ‘the same advantage as the large capitalist.’

• The London investment companies were formed to provide diversified exposure for a new breed of investors who had made money from the industrial revolution and in particular from the nineteenth century railway boom. The concept was swiftly taken up north of the Scottish border.

• The Scottish Investment Trust was registered on 27 July 1887 and was founded by John Dick Peddie, a well-known Edinburgh architect as well as a Liberal Member of Parliament.

• British Assets Trust, formed in Edinburgh in 1897 by James Ivory, was founded on an unlikely investment niche: the undervalued assets of distressed Antipodean banks and insurance companies.

• The Edinburgh Investment Trust formed on 1st March 1889 invested 53% of the initial portfolio in ordinary shares. Personal recommendations counted for a great deal, which explains the number of breweries, tobacco companies and even diamond mines selected at the time.

• Scottish Mortgage Investment Trust was launched in 1909 to finance rubber estates in what was then known as Malaya.

Revealed: The Cost Of Ignoring The Small Print