Asian Investment In London's Real Estate To Exceed Records In 2014

Research from leading global law firm Mayer Brown highlights that Asian investors pumped £5.8billion in the Central London market in 2013 and predicts this is set to increase in 2014. Almost 70% (£4.018billion) of Asian investment focussed on properties in the City, including the acquisition of the Lloyd's Building by a Chinese insurer for £260 million.

But it wasn't just Asian investors – of the top ten property deals of 2013, seven were made by overseas purchasers. There was also nearly £8 billion spent on acquisitions in the West End, including the £127 million purchase of 431-451 Oxford Street, opposite Selfridges' department store. The sale was one of the largest mixed-use property deal's in the West End in 2012.

Mayer Brown predicts that the outlook for 2014 is positive with large deals by Asian investors already announced, including Greenland Holding Group, a major Chinese developer, investing £1.2billion on two property projects in London. 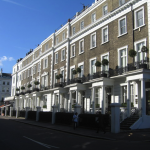 "London is at the economic centre of Europe so foreign investors' continue to be drawn to the capital by a weak pound and the UK's status as a haven for capital. Overseas investment from Asia will certainly grow in 2014 and we could by the end of this year see turnover exceeding pre-global financial crisis levels."

London's most popular destinations for Asian investors are likely to continue being the City, Docklands and parts of the West End. He also predicts the outflow of money to increase from the Japanese and Taiwanese markets as investors seek to diversify investments as well as the ongoing impact of regulatory changes that ease restrictions investing in overseas real estate.

Promote Employees Who Volunteer the Most, Think Tank Tells Bosses