Value of small business asset based finance up by 3% in a year, while SME overdrafts down by 2%

Asset based finance is increasingly taking market share from bank overdrafts as a key source of funding for SMEs, says the Asset Based Finance Association, the body representing the invoice finance and asset based lending industry in the UK and the Republic of Ireland.

The ABFA says that as banks continue to be constrained in their traditional lending to SMEs, smaller businesses are increasingly seeing asset based finance as a suitable way to unlock the value of a range of business assets to enable growth investment and free up working capital.

Asset based finance (ABF) enables businesses to secure funding against a diverse range of assets. Invoice finance (which is secured against the value of unpaid invoices) is one of the most widely used forms, but ABF also includes lending against inventory and plant and machinery as well as intangibles such as brand value and forward income streams.

Jeff Longhurst, Chief Executive of the ABFA, comments, “More and more SMEs are replacing traditional overdrafts with asset based finance – it is now a major part of the small business lending space.”

“SMEs are realising they can leverage the value of assets such as outstanding invoices for the direct benefit of their businesses – and there are a number of flexible options they can choose from.”

“For example, within invoice finance they can either go for an invoice discounting facility where they manage their own credit control, or they may prefer invoice factoring, where the lender takes on the credit control and collections process on their behalf. The latter is often particularly attractive for smaller businesses with fewer internal resources.”

“Unlocking this capital gives SMEs the means to purchase new equipment, invest in new systems or expand premises and increase headcount in order to ramp up capacity and capitalise on new growth opportunities.”

He adds, “It also gives them greater certainty about their financial position looking ahead, by developing on-going relationships with asset finance providers, based on a deep understanding of their current financial position and prospects.”

“While bank overdrafts can be withdrawn at short notice if companies are deemed no longer to need them, for instance during peaks in business, asset based finance is a longer term option, making it easier for companies to plan for the future.” 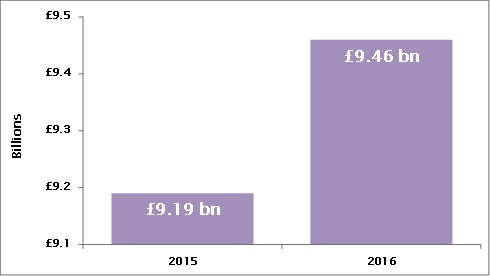 …while SME overdrafts down by 2%

*Annual averages based on quarterly figures
**Source: Bank of England