Works by renowned Australian artists Gordon Bennett and Susan Norrie have gone on display at Tate Modern for the first time.

They are among ten works of art which have now been jointly acquired by Tate and the Museum of Contemporary Art Australia (MCA) in Sydney. The partnership, launched in 2015, is made possible through a $2.75 million corporate gift from Qantas and enables both museums to expand their collections each year, bringing the work of Australian artists to new global audiences. 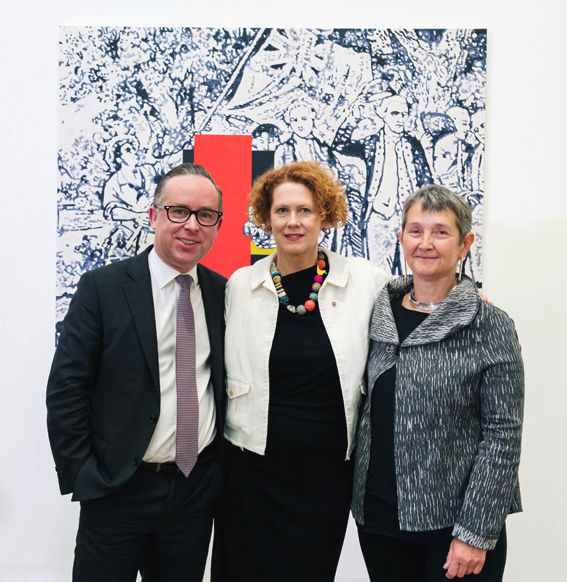 'Tate Modern has always championed a more international story of art, and we are delighted to see Australian artists represented in our new displays alongside those from Europe, the Americas, Africa, Asia and the Middle East. Working with our partners at the MCA and Qantas, we look forward to showcasing more Australian acquisitions in London and beyond over the coming years.’

‘We are thrilled to unveil this diverse range of joint acquisitions with Tate. This initiative is a true game-changer for contemporary Australian artists: it places their artworks in one of the world’s great public collections, where they will be seen alongside those of their international peers. It also enables us to acquire more ambitiously and strategically – transforming the opportunities for international audiences to connect with contemporary Australian art. Working closely with the Tate curatorial team has been an enriching experience; there’s been a real synchronicity in our approaches.’

‘What we love about this programme is the opportunity to grow awareness of Australian art not just in Australia through the MCA, but on the global stage through Tate. It’s a really powerful and unique combination – two of the world’s most influential cultural institutions working side by side to win new audiences for the amazing artists that we have in our country. Qantas believes in the power of art to tell Australia’s story – our Indigenous identity, our modern development and our links to the world, which is so vital to our future. As Australia’s national carrier we are extremely proud to be involved in this programme which helps to showcase the spirit of Australia to the world.’

Visitors to Tate Modern can find the works by Gordon Bennett and Susan Norrie on Level 2 of the Boiler House as part of the ‘Artist and Society’ display. This free collection display explores how artists respond to political contexts, raise awareness of social issues and argue for change in the world.

Gordon Bennett’s painting Possession Island (Abstraction) 1991 is based on an image of Captain Cook claiming the eastern coast of Australia in 1770. Bennett simultaneously obscures and draws attention to the Aboriginal man standing next to Cook, overlaying an abstract geometric shape which recalls constructivist art and the Aboriginal flag. Susan Norrie’s Transit 2011 is a video installation about the conflicting relationship between humanity and the natural world. It focuses on the Tōhoku earthquake and the meltdown of the Fukushima Daiichi Nuclear Power Plant as examples of the destructive power of nature and technology.

The ground-breaking collaboration between Tate, the MCA and Qantas was announced in 2015 as an ambitious five-year joint programme. The programme enables a range of major artworks by contemporary Australian artists to be acquired each year for the collections of the MCA and Tate, which are then owned and displayed by both institutions.

In the first year of the partnership, alongside works by Gordon Bennett and Susan Norrie, Tate and the MCA acquired a video installation by Vernon Ah Kee (tall man 2010) and an artist book of sixteen prints by Judy Watson (a preponderance of aboriginal blood 2005). These were joined in 2017 by three paintings by Helen Johnson (Seat of Power2016, Bad Debt 2016 and A Feast of Reason and a Flow of Soul 2016), an installation by Richard Bell (Embassy 2013-ongoing) and a video by Peter Kennedy with John Hughes (On Sacred Land 1983-4).

Study of Russia exhibition at Asia House in London