The ‘ashes’ of the Australian Government’s conscience on climate change were presented to the nation’s High Commission in London today (Monday 18 November 2013) by the Head of Campaigns for Friends of the Earth, Andrew Pendleton.

The award was in recognition of Australia’s mounting opposition to international efforts to cut carbon emissions at the UN climate summit, currently taking place in Warsaw, Poland.

Campaigners from the environment charity dressed in cricket whites to hand over a replica of the Ashes cricket urn, bearing the message: “The Ashes: Here lies Australia’s climate conscience”. They also presented a certificate that mimicked the original citation of the cricket Ashes, which says:

In affectionate remembrance of

Which died at the Warsaw Climate Talks

Deeply lamented by millions of people affected by climate disasters

The action was part of a world-wide protest against the Australian Government’s decision to turn its back on its responsibilities to cut fossil fuel pollution and its attempts to block moves to put in place a fund to give financial help to people hit by future climate disasters.

Last week Philippine negotiator Yeb Saño gave an emotional speech to the climate summit calling on world Governments to finally step-up and act on climate change, and an end to the current “climate madness”.

Friends of the Earth’s Head of Campaigns Andrew Pendleton said:

“The Australian Government’s opposition to climate change action is a national disgrace.

“Every nation should be going in to bat for the planet and tackling the mounting threat of global warming. We all need to play our part in building a cleaner future.” 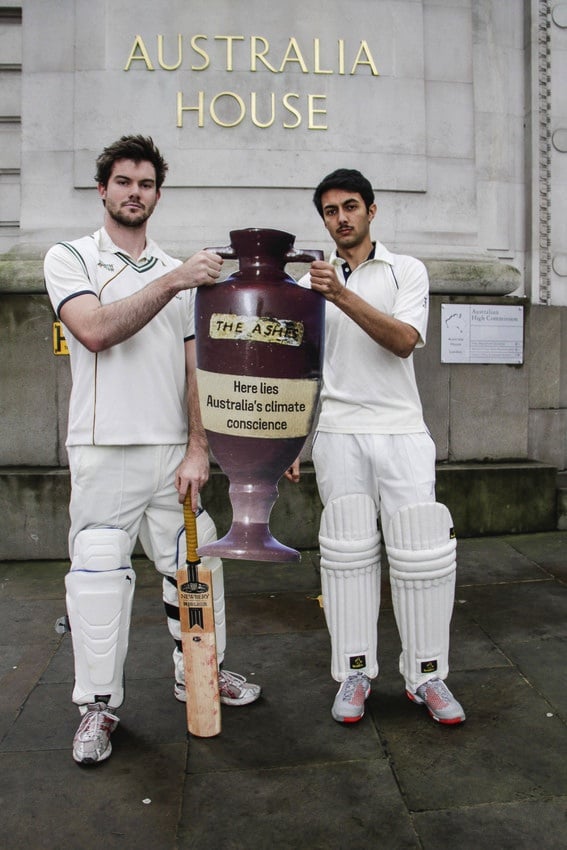 Courtesy of Friends of the Earth