After falling for the last two months Rightmove reports that its asking prices for England & Wales have rebounded by 2.8 percent to reach £252,418 in October.

This represents a rise of £6,923 for the month and this was led by a massive boost in London asking prices of 10.2% or £50,484. Rightmove called this rise 'unsustainable' but that there is a 'buying frenzy' in some parts of the capital.

But the overall average was weighed down by areas outside London where two regions saw record monthly falls, five were negative on a year-on-year basis and seven in ten regions experienced annual price rises lagging behind inflation said Rightmove.

There is now a standard pattern in asking prices is re-asserting itself as the dust appears to be settling after the credit crunch all those years ago.

A glance at the graph below will show how, on an England & Wales basis, this is panning out.

There has been a pre-summer surge very year for the last five years then a drop over the summer followed by an october boost latterly at a level just below the summer. Then there is a drop into Christmas in the new year before the rebound before summer.

This of course is nothing new as annual patterns were ever thus prior to the financial crisis.

But it is the very noticeable upward trend since 2009 that catches the eye. If (and that is a very big if) this trend continues we could see asking prices drop to about £237,000 over the festive season before reaching about £258,000 or thereabouts by the summer of 2014.

That would of course rely on continued good (or mad, depending on which way you look at it) sentiment amongst those buying in London with the deposits/access to cash and mortgage funding.

But of course if London becomes more isolated from the rest of the country where property prices are concerned then a national trend means little. Also, remember that these are vendor asking prices, not what was actually achieved in a sale.

To get the figures Rightmove measured 127,902 asking prices – circa 90% of the UK market. The properties were put on sale by estate agents from 8h September 2013 to 12th October 2013 and advertised on Rightmove.co.uk. 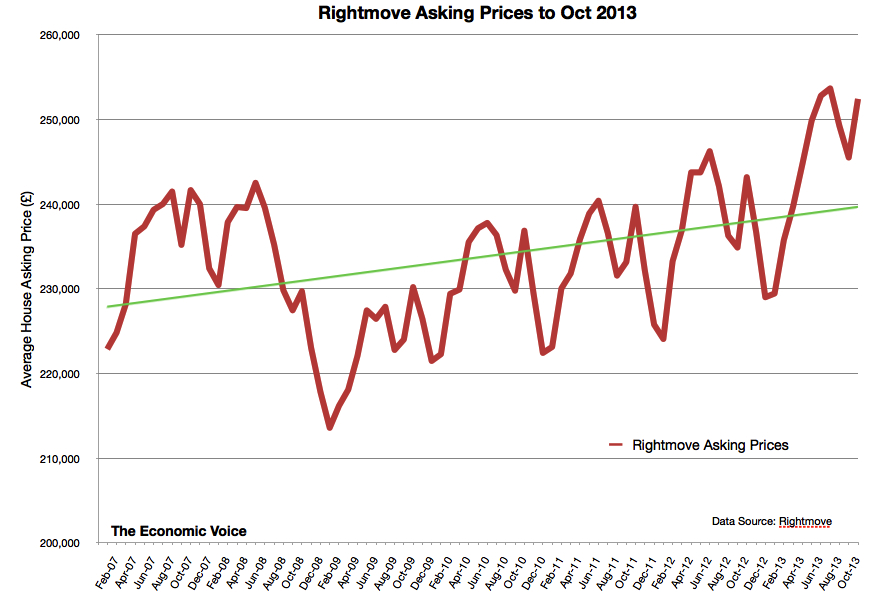 80% chance of no double dip recession