• Increase in Transactions vs Previous Year – 9.6%

This marginal growth is three times lower than the UK's long term average of 9.4%, as recorded by the Office of National Statistics since 1969. Prices have crawled up 11% in six years since the pre-credit crunch high in 2007, representing growth over this period of less than inflation which has totalled 15%.

"Rolling annual price growth is our most accurate market indicator as it removes changes caused by seasonality or quarterly volatility. This shows appreciation is well below peak levels and that Mark Carney, the Governor of the Bank of England, has been spot-on to dismiss 'bubble-happy' commentators. Knee-jerk reactions to short term movements are not helpful and should be tempered by a proper understanding of market dynamics. Residential property prices in the UK move in cycles. Periods of growth are generally followed by periods of consolidation and we are now entering a new growth cycle." comments Naomi Heaton, CEO of London Central Portfolio. 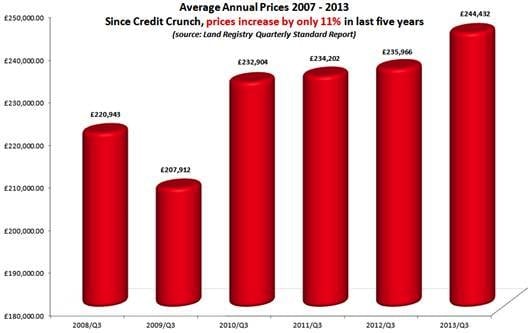 When Prime Central London (PCL) is excluded, the average price of property in England and Wales has just reached £247,693. This is dangerously close to the threshold at £250,000 where Stamp Duty jumps from 1% to 3%, representing a huge tax increase from £2,500 to £7,500 for the average buyer.

Yesterday, a group of Tory MPs called for Stamp Duty to be scrapped under £500,000 and these new statistics should set off further warning bells for the Chancellor in the lead up to his Autumn Statement. This slab tax suppresses transactions, not only curtailing the ability of people to trade up but the ripple effect prevents first time buyers getting onto the ladder. Easing this tax burden would be a popular move whilst freeing-up the market without using artificial and potentially dangerous stimulus packages.

In terms of sales volumes, increasing availability of credit through Funding for Lending, marginal rises in employment and Osborne's flagship help-to-buy scheme have all contributed to signs of positive growth. Annual transactions have increased by 9% year-on-year to 689,576 but this is still 39% below their pre-credit crunch high in 2007. 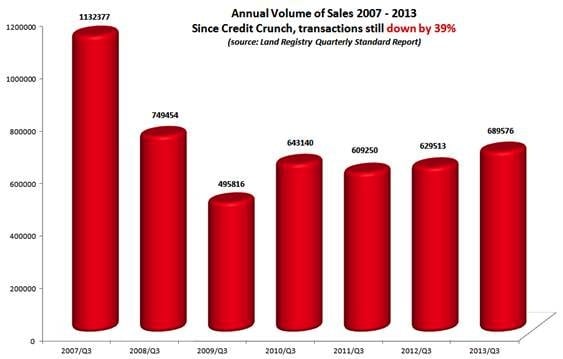 "The UK's housing market is getting back on track. However, the Government should be wary. The number of properties being built is still nowhere near enough to satisfy demand.  According to the institute of Public Policy Research, 280,000 houses more houses are needed each year. Whilst cheaper mortgages and welcome signs of an economic recovery might boost housing transactions, it does not tackle the problem of lack of stock. If transactions continue to increase, upward pressure will inevitably be put on prices. During his December policy speech, Osborne should now address the supply end of the property equation with viable plans to provide sustainable affordable housing." concludes Heaton.