A slight growth in average prices in Q2 2013 will bring good news to home owners nationwide but the quarterly statistics just released by HM Land Registry should set off warning bells for the Chancellor.

The price of all property in England and Wales has grown 1.3% this quarter to reach an average of Â£242,415. Encouraging, if not for the looming stamp duty crisis which London Central Portfolio (LCP) has repeatedly highlighted. Average prices are edging ever closer to the threshold at Â£250,000 where Stamp Duty leaps from 1% to 3% and a huge tax increase from Â£2,500 to Â£7,500. In fact, for flats, which represent 18% of the total market, the average price breached the threshold this quarter to stand at Â£250,101.

Transactions in England and Wales have seen a sharp increase of 26.6% since Q1. This could in part be due to increasing economic confidence with more availability of credit, stable interest rates, and Osborne’s flagship help-to-buy scheme. However, it is more likely due to seasonality as transactions dropped by 21.23% in the previous quarter and over the year, transactions have only witnessed growth of 1.16%.

As expected, the market continues to storm ahead in Prime Central London (PCL). Average prices grew 7.2% this quarter to reach Â£1,472,181. Transactions rose 11.64 % but like England and Wales, the annual increase is low at 2.22%.

The PCL ‘houses’ sector, notoriously volatile due to its tiny size and huge price diversity, put in an exceptionally strong performance. 230 houses were sold, a 33% increase on last quarter. The ‘top five most expensive sales’ in Q2 2013 were all houses located in PCL bringing the average price to a new high of Â£3,136,615.

Naomi Heaton, CEO of LCP warns however: “Headline average prices in PCL are becoming increasingly distorted by increasing numbers of ‘super prime’ transactions. These top-end deals do tend to mask real average prices. In truth, 63% of all sales this quarter took place under Â£1m.” 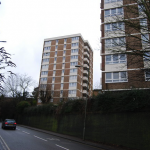 Blocks of Flats by Nigel Chadwick via Wikimedia Commons

Nevertheless, PCL is a tiny area of undeniably exclusive properties which represent less than 1% of all transactions. The stamp duty it generated last year was in the region of Â£400 million compared with Â£1.6 billion in England and Wales: in other words 25% of the Exchequers SDLT tax take. In the last quarter, the average tax take at Â£73,609 per property was 30 times higher than the Â£2,424 achieved in England and Wales.

Heaton comments “As the Exchequer has just claimed they cannot afford to raise the 1% stamp duty threshold above Â£250,000 to ease the burden for the average buyer, it seems economic logic to support the top end of the market which could so easily fund this relief rather than trying to dampen it. We should welcome top-end investment as a core plank in our strategy for economic recovery.” 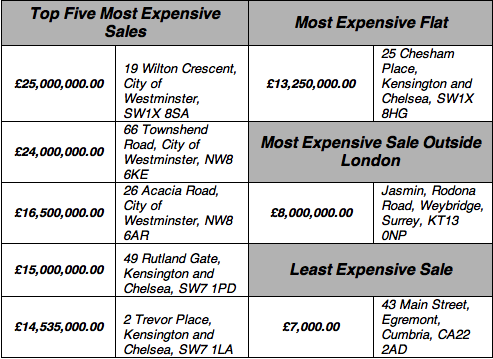