Aviation heroine Amelia Earhart is remembered today on what would have been her 115th birthday yet her final resting place remains a mystery.

Back in 1937 the world was shaken by the news that Amelia Earhart hadÂ disappeared over the Pacific Ocean during her attempt to circumnavigate the Earth.

Neither Earhart nor herÂ Lockheed Model 10 Electra was ever recovered.

Born on the 24th of July in 1897, Amelia was first introduced to the world of aviation at a World War One fighter pilot Â aeronautic display in Toronto, Canada.

A few years later in 1920 Amelia took to the skies for the first time as aÂ passengerÂ in a ten minute flight after which the rest is history as the world's first lady to fly solo across theÂ AtlanticÂ ocean embarked on her flyingÂ career.

But Earhart was not just satisfied with her flying achievements, she also wanted to empower other women to do the same as her and played a pivotal role in setting up the Ninety Nines, aÂ women's organisation for female pilots.

Aside from the numerous aviation records she broke, Â Amelia will be also be remembered for her battles against the then male dominated world of aviation and the male chauvinistÂ prejudices of that period in time.

Many women's rights activists have cited Earhart as their main influence and she remains an icon of the feminist movement to this day. 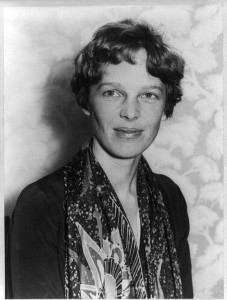 Image Copyright by Underwood and Underwood (not renewed) [Public domain], via Wikimedia Commons