We can’t keep unwanted immigrants out using the law so let’s tell them that Britain sucks.

The latest wheeze to curb what is seen by some as rampant uncontrolled immigration is to tell would be immigrants that the UK isn’t as good as they are led to believe. Cue the advertisements in Bulgaria and Romania to persuade them to cast their eyes elsewhere.

So what will we be telling them? It rains a lot and that the streets are not paved with gold it seems. Well, I expect people looking to come to Britain will not be put off by a bit of rain and they will also take a good stock of their lot before uprooting and coming here.

But the amazing thing is that while we are badvertising Britain to certain audiences we’ll be doing exactly the opposite to potential investors. Mixed messages or what?

Then of course there’s been the UK’s latest Great Britain is Great campaign aimed at, yes you’ve got it, Romania! “It centres on areas of British excellence focusing on reasons to invest in and visit the UK” says the spiel.

You just could not make this stuff up.

Fast forward to Prime Minister’s Questions and you can imagine what Ed Miliband would focus on wouldn’t you. ‘Look at how bad the country is under the Tories – and they admit it!’

This is just a last ditch attempt to control the uncontrollable.

The unfettered movement of people within a growing EU is a stated aim of that organisation, something we in the UK have signed up to hook, line, sinker and jetty. Everything has been set up to achieve it with no real discernible opposition from the main parties. The law stands on the side of the people who wish to move in or out of the UK (yes lots do leave). All the talk of controlling it has been just that, talk – and it won’t change a thing.

Now we are on the verge of opening the gates further and the best we can come up with is a weak marketing campaign to placate those who wish to see immigration curbed.

At the end of the day it’s just more politics and no action. But it might keep investors away as well as convincing the people we need to leave. 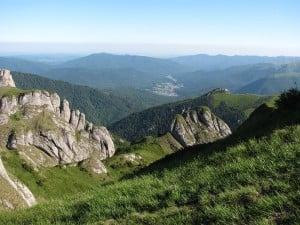 Lovely view of the CiucaÅŸ mountains, Prahova County, Romania. By The Vindictive (click to enlarge)

Image by The Vindictive (Own work) [CC-BY-3.0 (http://creativecommons.org/licenses/by/3.0)], via Wikimedia Commons