'Baggage rage' Simmers for the Summer

Most of us have had “suitcase seething” moments booking an online “no frills” flight with all those extra luggage charges, or being charged excess baggage for an extra kilo or two at the airport check-in desk.

Now, at last, the true level of “Baggage Rage” has been laid bare in a new survey published today by a carrier network that simply allows you to take all your luggage free – our ferries.

Despite the “abrupt culture” of Ryanair crashing to earth, forcing Mr O’Leary to announce reduced baggage charges for 2014, based on a high season return flight the Irish airline still charges you £50 for a 15kg hold suitcase, or £70 for a 20kg case; an excess baggage charge of £10 per kg at the airport, plus an eye-watering £100 to take and bring back skis or golf clubs. Other no-frills airlines are no less shy in taking your hard earned cash for carrying luggage.

Multiple baggage charges; different bag size and weight restrictions; airport check-in delays; penalty charges if you do not book bags online , and dismay at what you can’t take back home from holiday – our resentment boils over in every virtually aspect of the survey, commissioned through One Poll for industry body, Discover Ferries, to mark the start of National Ferry Fortnight, 15 – 29 March.

We find out what happens when your baggage is 3kg overweight at the check in – do you repack, leave stuff behind, put more clothes on, pay the extra, have a row with your partner or the attendant, or simply break down and cry?!

Top of the “baggage beefs” that annoy us most are those sky-high airline charges for suitcases in the hold – with 44% putting this top of the list. This was closely followed in second place by 41% of respondents saying their greatest rage is that baggage allowances are simply too low, with 33% moaning most about often not being allowed a handbag in addition to a cabin bag – a figure that rose, understandably, to 45% among women. Fourth in the greatest “Baggage Rage” stakes, cited by over 32%, were those exorbitant excess charges for straying over your allowance, very closely followed in fifth place by nearly 32% of the sample hating getting caught out by extra charges for not booking in luggage correctly online. The final straw – voted for by 26% – was the double whammy of weight restrictions and some charges among airlines for cabin bags. 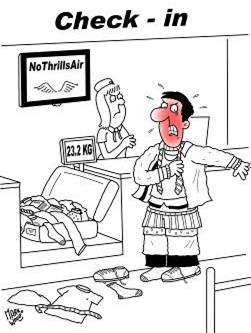 When it comes to baggage rage when your family is in tow, however, hell has no fury as that actually experienced within the airport. Top of the baggage woes were those interminable queues and baggage checks, voted for by 29%. Second highest, at 25%, was being caught for extra luggage charges at the check-in, and third were baggage delays at the destination airport, infuriating 23% of respondents most. Fourth, with a 20% vote, came losing luggage en route, while manhandling luggage to the check-ins was next at 17%. The last two “baggage hell” votes were 10% for lifting heavy bags up yourself to check them in, and perhaps surprisingly in last place, 9% cited baggage handlers strikes as their worst family airport bag experience.

When asked what items families with children would be most likely to have to be left at home due to airline luggage restrictions,52% said it would have to be baby’s high chair for the chop. Next forced choice to ditch, at 21%, was the baby potty, closely followed, among 21% of respondents were the children’s sports gear, like footballs, tennis racquets and sports shoes. 19% said they would have to leave behind extra baby’s nappies, while a close 18% opted to leave out of the suitcase the child’s favourite game console or tablet – a sure-fire recipe these days for family discontent. Last on the must-leave-behind list, at 9%, is, perhaps surprisingly, the family first aid box.

For a family holiday to succeed, 62% of survey respondents said it was important or very important to be able to freely choose how much baggage can be taken, compared with 9% who said it was not important or not important at all. It was acknowledged among 64% that adult women tended to have the biggest personal luggage needs, but adult men were next at 9%, in front of their teenage daughters at 6%, babies 4% and toddlers at 4% each , ahead of young sons and daughters, at 3% each. Most luggage-efficient were grandmothers and grandfathers, at around 2% each.

And do we care about our luggage contents? Well yes, 53% always lock all the cases on a family holiday and another 25% sometimes do – compared with 22% who never lock the family suitcases.

The survey also explored how you might instinctively react if your airline bag was found to be 3kg overweight at check-in. 45% said they would transfer some clothes to their partners’ bag and hold up the queue, while 38% would take some clothes out and simply wear them for the journey. 33% would promptly pay up the extra fee, while 19% would jettison any heavy toiletry items and leave them behind. The more emotional 4% amongst us simply start to cry, while another 4% would turn on the check-in attendant, and 3% would have a row with their partner!

It is not only what you cannot take with you on holiday, it is what you cannot bring back by air. The survey asked what items you would be most upset about not being able to bring back with you, due to hold restrictions. Top of the list, at 23% was local artisan craft mementos, followed by electrical goods and duty-free cameras at 22%. Booze is next – at 21% are bottles of local spirits reluctantly left and, at 20%, bottles of local wines – all too heavy and fragile. 15% of respondents would forsake fashion clothes from abroad, with 14% discarding country of origin foods and cheeses. 12% would leave behind local leather goods, and 11% would be most upset at not bringing home country of origin art and paintings. 8% would leave behind fossils, rock crystals and seashells, with nearly 5% ditching any woven rugs or carpets. If you think you and your family are upset about leaving all these things behind, spare a thought for the local artisans and shopkeepers, who thought tourism was there to help them.

So the answer to all this boiling “Baggage Rage” is actually quite simple – travel on holiday by ferry, taking your family in the car, and then you can also take- and bring back- as much baggage as you can fit in, for free.

Asked to rank in order of importance the rage-free family baggage services provided by ferries, first came no restrictions on numbers of baggage items, second came no weight restrictions on individual baggage items, third came no charges at all for family luggage in car, fourth came no need to move baggage at all on journey and fifth came the ability to easily get to an item in luggage.

And freed from all the baggage shackles the survey asked one last question – which Top 10 family favourite items would you take on holiday by ferry, that you cannot by air? Top of the list, voted for by 29%, would be “comfort clothes” for all the family, from dressing gowns and slippers – to even onesies! Next, most important for 25%, would be the children’s bikes, ahead of extra family waterproof clothes at 21%. Fourth, at 20% would be the pet family dog, with most ferries equipped to take pets. Children’s sports gear is next most popular at 19%, and a child’s carrycot or car seat receiving 18% of the votes. Seventh are the kids’ favourite toys or game consoles at 16%, and only then does the dad or mum’s golf clubs get a look in at 10%. For Britons, that most revered item of teapot and tea came ninth at 9%, with nearly 8% highlighting family ski gear at number ten.

“We were not surprised at the survey highlighting the extent of “Baggage Rage” in Britain around family holiday needs, given not only the draconian luggage costs and restrictions of airlines, but also the cavalier attitude of some in imposing them” said Bill Gibbons, director of Discover Ferries. “On ferries, we believe in a relaxed, friendly and no-hassle family experience, and that also extends to all the different kinds of passenger baggage, which is unlimited and goes free on ferries.”

Visit www.discoverferries.com – your one-stop-shop for up-to-date information and news about travelling by ferry.

Holiday injury claims – what you need to know