As the sculptor, Mohammed Ghani Hikmat, showed me around his modest Baghdad home in 2002, I was struck by the purity of the artist and felt comfortable in his presence even though he was one of Iraq's most prominent and beloved artists. He was an Icon.

Mohammed was born in Baghdad in 1929 and studied sculpture for seven years in Italy. In 1962 he was appointed as a professor of sculpture at the Academy of Art in Baghdad. He has lectured all over the world on Iraqi art, including the United States, Europe and Moscow.

As we walked around his back garden, I spotted a bronze head that I recognized immediately. It was a section from the Fountain of Kahramana, Ali Baba and the 40 Thieves. I had seen the full sculpture in the square not that far from my hotel. Mohammed had shaped the figure with his own hands to remind the Iraqi people of their glorious past. He loved Iraq and was deeply saddened by her destruction after the two Gulf war invasions.

It seemed every shelf and ledge in his home was filled with dozens of small carved sculptures. A group of figures, struggling under the crushing weight of a large block of stone, stood out for me.

Mohammed talked about the crippling sanctions and how they were inflicting massive suffering on the Iraqi people.

At the Baghdad foundry where one of his huge sculptures was taking shape, I walked around underneath the abstract structure and marvelled at the sweeping lines and the scale of the work. I was struck by the simplicity of the building process. There were no signs of the standard “perfection” we emphasize in the west when we create monumental sculptures. No exotic, high tech rubber moulds.

The process was all hands on. Blocks of white styrofoam were first carved to shape the basic design. Clay was then layered and shaped in preparation for the final stage of forming the plaster moulds that would then hold the heat of the molten bronze. Workers were running about everywhere. Some were feeding a simple steel furnace on steel legs, about the size of small car, with all mixtures of scrap metals that would formulate the bronze. We helped throw in some large brass shell cases into the screaming furnace along with brass faucets and pipes. A large forty five gallon drum of fuel rested precariously above on an adjacent high wall. Fuel could be seen dripping out constantly as a pipe fed down to the furnace. Every once in a while flames would flare up on the outside of the furnace and workers would slap it with shirts and rags to put out the unwanted blaze. The whole process seemed dangerous and unpredictable.

Alongside sat large pots with steel carrying rods attached. These were being super heated for hours by blow torches. The white plaster moulds had also been heated and dried thoroughly for days by building a brick kiln around the shapes and inserting blowtorches into holes to heat the whole thing up.

The really exciting part came when the bronze was ready to be poured into the moulds. The entire sculpture is not cast in one piece. It is sectioned up into manageable sections and then reconstructed by welding all the bronze pieces together after they have been taken out of the moulds. 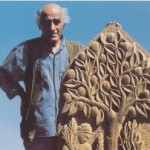 Two men stood at the front of the furnace with a large two or three gallon pot and waited until a shutter was lifted, allowing the melted bronze to pour out and fill the bucket suspended between their steel carrying rods. Their feet were protected only by open sandals as the men shuffled quickly with their load to the moulds and tipped the boiling liquid into the top. A procession of workers kept the drama going steadily and, in a short time, the mould was filled. It was a bit alarming to see the mould form cracks from the intense heat and weight. But it all seemed to hold together. Apparently they still use ancient formulas for the plaster, using the fibres from the local trees for high strength as part of the mix. The sculptors swear that this mix still works best and they laugh at the way western sculptors insist on wearing special “space men” suits as protection. They say that a sculptor should get a few burns in return for his work as it is more natural.

The cooled pieces are then welded together to form the structure and a lot of hand work goes into enhancing the details such as the sharp lines in the folds of the eye among other details hard to catch in the simple mould process used. I liked the raw, unmanufactured look in the final product. Much more pure.

The Iraqi Museum of Modern Art was in ruins after the aftermath of the last 2003 invasion. There were mounds of shattered sculptures and empty frames. Mohammed turned to his colleagues and students and organized a campaign to search and buying back stolen works. He formed and headed a Committee for Recovering Iraq’s Culture and was able to recover about 100 important works by renowned artists. He pleaded with the Coalition Provisional Authority (CPA) and other foreign organizations for financial support and aid to save Iraq’s modern heritage. Failing to get any funding, he continued his personal efforts even after moving to Amman. (He had fled there shortly after the 2003 invasion when his family came under threat and his son was taken hostage for money.)

His country remains broken and every day is still a struggle for the Iraqi people.

Mohammed died in Amman, Jordan. His body was returned to Baghdad on Sept 15th 2011

His sculptures and his beautiful spirit still live on and he is missed by all.