The Thomson Line is a 30km underground train line that is expected to be fully completed in 2021 and is operated by the Land Transport Authority. Fully underground, the Thomson Line comprises 22 stations, including Mayflower Station and six interchange stations. When completed it will be the sixth Mass Rapid Transit (MRT) Line and run parallel to the existing North-South Line. Work is due to start in the first quarter of 2014 and is scheduled to be completed by 2020. 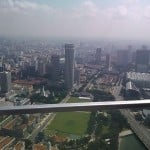 The second contract for SMRT Trains involves the changing of sleepers from timber to concrete as part of the renewal and upgrade of the existing North-South Line and is being delivered collaboratively with the UK rail team. Work on this contract is due to start in the fourth quarter of 2013 and is expected to complete by the end of January 2015.

Commenting on the contracts, Andrew McNaughton, Chief Executive Balfour Beatty said: "We are excited to have been awarded these prestigious contracts and to be taking part in enhancing Singapore's strategic MRT system expansion.

"Rail is a key focus for the Group. We have great expertise in designing, supplying, constructing, maintaining and managing rail infrastructure. The key to our success is our collaborative approach and the sharing of the knowledge and technology across our business reduces the risk for our clients."

Euro gains after Greek government survives vote of no confidence