BAME workers over a third more likely to be in insecure work, finds TUC

1 in 13 BAME workers now in temporary or zero-hours work, compared to 1 in 20 white

Black, Asian and minority ethnic workers are over a third more likely than white workers to be stuck in temporary or zero-hours work, according to a new TUC report released today (Friday).

The study found that 1 in 13 BAME employees are in insecure jobs, compared to 1 in 20 white employees.

There are over three million BAME employees in the UK, of whom nearly a quarter of a million are in zero-hours or temporary work.

Black workers in particular face insecurity at work, and are more than twice as likely as white workers to be in temporary and zero-hours work. 1 in 8 black workers are in these forms of work, compared to 1 in 20 for white workers.

The report also finds that between 2011 and 2016, the number of black workers on temporary contracts shot up by 58% – over seven times the increase for white workers (8%).

Black women have been the worst affected, with 82% more now in temporary jobs than in 2011, compared to a 37% increase for black men.

Previous TUC research shows that temporary and zero-hours workers typically get paid over a third less than workers on permanent contracts. 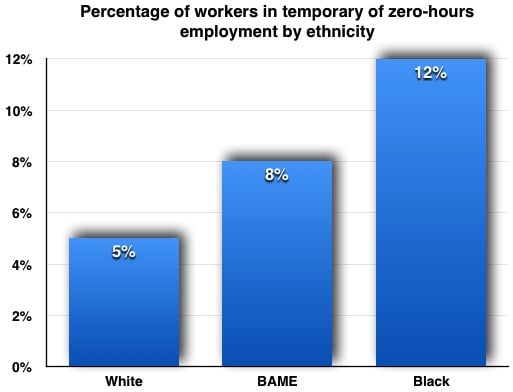 “Black, Asian and ethnic minority workers are being forced into low-paid, insecure work. And it’s getting worse.

“This problem isn’t simply going to disappear. Dealing with insecure work has to be top of the list for the next government. And we need a real national strategy to confront racism in the labour market.”

The TUC is calling on the next government to: