Bank of England keeps Bank Rate at 0.5% and Asset Purchase Programme at £375 billion

The Bank of England’s Monetary Policy Committee at its meeting on 8 October voted to maintain Bank Rate at 0.5%.

The Committee also voted to maintain the stock of purchased assets financed by the issuance of central bank reserves at £375 billion.

The minutes of the meeting will be published at 9.30 a.m. on Wednesday 22 October.

“With the MPC deciding for the 66th successive month to keep interest rates on hold, speculation earlier this year that the UK was headed for a near-term rate rise now seems like a distant memory. But with little reason for the doves on the Committee to change their views, today’s no-change decision was far from surprising. 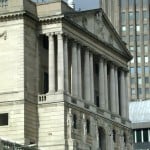 "Evidence from the last month is likely to have bolstered the confidence of those voting to keep rates on hold. Admittedly, recent revisions to GDP have presented the UK economy in a better light. But we think that the revisions will cause the MPC to improve its estimate of the economy’s potential, implying a limited impact on the Committee’s view of spare capacity. Meanwhile, inflation has fallen further below target; wages growth remains pitiful; the manufacturing sector is showing signs of a slowdown; and the euro-zone economy is faltering.

"These developments are unlikely to reverse anytime soon, so 2014 is set to pass with interest rates remaining at current rock-bottom levels. And while rates will probably start rising in the first quarter of 2015, the risks point to that date being pushed back further."

Bookmakers William Hill believe it is an odds-on shot that the bank rate will rise before the General Election takes place – offering 2/5 that it does so, and 7/4 that it does not.

'We've taken the view that a rise in the interest rate before the General Election is more likely than not' said Hill's spokesman Graham Sharpe.