Bank of England plan to buy bicycles in case of meltdown

According to Lord Myners the Bank of England considered buying some bicycles so that, in the case of complete financial meltdown, bank staff could move quickly and anonymously around the city.

According to the former senior financier and once City Minister speaking in a parliamentary debate, this was sometime back in 2006 or 2007.

Isn’t it great that while we were being told the economic problems were nothing to be worried about; those with the knowledge and power were already planning for a complete banking failure? But only thinking of themselves!

So, we get a huge financial collapse and those that got us there would think that it would be a good thing for them to go cycling about to more meetings to make even more disastrous decisions?

Bankers on bicycles, the mind boggles.

Of course the bicycles would have to be tandems. After all, the chauffeurs have got to be employed so they may as well sit at the front steering and pedalling whilst the worthies on the rear seats power-conference on the company iPhones.

They would also have to come with fixed gears to allow for some back-pedalling.

A couple of related quips circulating the ‘net about this: ‘are they business cycles?’ and ‘will they be economic Raleighs?’

But whatever they were you could imagine the procurement process making them worth more than their weight in gold. 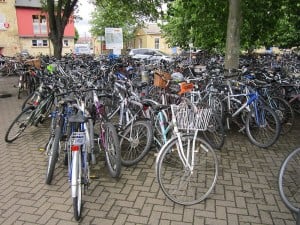 It's lonely at the top – who supports the CEO?