Banning the use of hydrofluorocarbons (HFCs) – super greenhouse gases used in refrigeration – in supermarkets would be one of the cheapest and most effective ways of reducing greenhouse gases in Europe.

Speaking at the shecco ATMOsphere conference in Brussels, the London-based Environmental Investigation Agency (EIA) called on European Union member states to push for strong and ambitious measures in the current review of its F-Gas Regulation governing HFCs.

“It’s time to act. We know that banning HFCs from new commercial refrigeration equipment is not only possible but could be a boost for European industry. At the same time, the alternative technologies are demonstrating energy efficiency gains too, providing a double win for the climate,” said EIA Senior Campaigner Clare Perry.

Replacement technologies primarily relying on carbon dioxide and hydrocarbons are increasingly cost-effective, and upfront costs are expected to fall further as production volumes are increased.

“We have seen a few slightly hysterical comments from the chemical industry about how much moving away from their HFC products would cost – they are simply trying to protect their profits, nothing more,” said Perry. 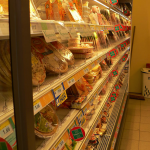 Indeed, change is already happening. EIA's latest survey of the supermarket sector – Chilling Facts V – revealed that supermarket chains across the EU, and particularly in the UK, were moving away from HFCs towards natural refrigerants, and reaping benefits in the process.

“There was a very clear message at the ATMOsphere conference from both retailers and suppliers and that is that they are already successfully moving away from HFCs – they plan to continue the roll-out of climate-friendly refrigeration but what they are looking for is a clear legislative signal with concrete timelines from the F-Gas Regulation,” added Perry.

EIA is calling on the European Member States to support measures to introduce a tight cap on the amount of HFCs which can be put on the market, and to ban their use in all areas where safe, energy-efficient alternatives are available, like commercial refrigeration.