Campaigners from the World Development Movement will protest at Barclays' AGM today, accusing the bank of contributing to global hunger through gambling on food prices.

Barclays announced in February that it was partially withdrawing from speculating on food prices, with chief executive Antony Jenkins saying the practice was "not compatible with our purpose". But the bank continues to make money from enabling other financial players, including pension funds, to speculate on food.

Banks and hedge funds have been pouring millions of pounds of speculative money into agricultural commodity markets, pushing food prices beyond the reach of millions of people. Legislation to tackle speculation is on the table at the EU, but the UK government has so far opposed strict controls. 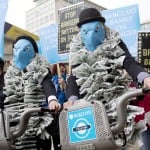 "Barclays has taken a step in the right direction by pulling out of some types of food speculation. But its actions are effectively whitewash. It still profits from financial gambling, fuelling food price rises in a world where nearly a billion people go hungry. Only tough regulation and a level playing field can curb speculation and prevent banks from playing havoc with food prices."

Barclays has been the leading UK player in commodity speculation, and the third largest player globally behind US investment banks Goldman Sachs and Morgan Stanley. It has not revealed how much money it continues to make from food speculation following its partial withdrawal.

Nigel Farage to Call for Public Vote on Maria Miller