Barclays has hit the news with two different stories today. The first concerns their contactless payment cards, which may allow unencrypted information to be lifted from them. The second is about their settling a so-called swap mis-selling case before it got to court.

ZDNet is reporting that a Channel 4 documentary due to be broadcast this Friday [1] will show how UK customers of the bank can have some of their contactless payment card details lifted by a mobile 'phone.

Mobile ‘phones can be programmed, says the report, to lift the card details off of the cards even through clothing, bags and wallets.

Channel 4 said in an E-Mailed statement "Thomas Cannon of ViaForensics told Channel 4 News : 'All I did was I tap my phone over your wallet and using the wireless reader on the phone I was able to lift out the details from your card, that includes the long card number, the expiry date and your name. None of it was encrypted, it was simply a case of the details coming out through the air'."

It is estimated that there are some 13 million users of these cards (smeweb.com/index.php?option=com_content&view=article&id=3535:barclays-customers-risk-having-their-card-details-stolen&catid=62:news&Itemid=101) and the investigators could not get the same information from other issuers’ cards.

As Barclays points out, the information is the same as is on the front of the card, which should not be enough to purchase goods. That is if you rely totally on the actions of the retailer to follow the correct procedures. But as the Channel 4 reporters were able to buy stuff on line through Amazon it does show that there is a potential problem. 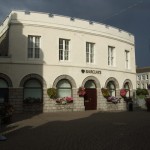 The Government Department for Business, Innovation and Skills wants this flaw addressed quickly with the replacement of the cards. That way the problem goes away.

On the second matter, Barclays has settled a case out of court concerning the alleged mis-selling of interest rate swaps to small businesses.

The bank has agreed to settle such a claim that Wand Property had brought against it in a move says the Telegraph, to possibly defuse the swap mis-selling scandal.

That this could become another large mis-selling scandal for all the major banks is indicated by the emergence of adverts touting for business amongst those that bought these complex financial products that cost them a lot of money.

The Bigger Oil Story Behind the Headlines: Interview with Michael Levi