Barclays slyly announced Â£38.5m of bonuses for its top executives whilst the country's attention was diverted by belt-tightening measures in the Chancellor’s Budget.

Chief Executive Antony Jenkins was awarded 1.8m shares worth Â£5.3m. Jenkins cashed in half of the shares as the appropriately named head of controversial investment banking division, Rich Ricci, was awarded Â£17.5m worth of shares. Rich immediately cashed in all of his shares. These rewards are despite pre-tax profits plummeting from Â£5.9 billion to Â£246 milllion.

Barclays underhand move has reignited public anger over excessive pay after a year in which the bank was fined Â£290 million for rigging Libor and has been mired in a string of scandals, ranging from mis-selling to structuring aggressive tax avoidance schemes.

“This massive bonus pool is an outrageous reward for failure in a year that can only be described as the most shameful in Barclays’ 323-year history. Trying to hide their big pay-checks and share options under the cover of the nation's belt-tightening budget is simply crass.

"As public sector workers face another year of pay freezes and rampant inflation, Barclays bankers are popping champagne corks as if the financial crisis they helped engineer never happened. Meanwhile the only banks actually growing in austerity Britain are food banks!

“It is hard to think of a justification for Jenkins’s bonus, given that he has barely begun his flagship ‘Project Transform’; and Rich Ricci is the head of the very investment arm responsible for the company’s biggest failings.”

This video released by Move Your Money highlights the bank’s failures in 2012:

This news comes after a difficult period for Barclays, in which it set aside a further Â£1 billion to compensate customers for mis-selling; it emerged that the Financial Ombudsman received more complaints about Barclays than any other bank; and new questions arose about the way Barclays raised money in Qatar to avoid a tax-payer bailout during the financial crisis.

New research suggests that public outrage over excessive pay is still increasing, and is one of the key factors in making people consider moving their money.

A recent poll by YouGov said that 38% of respondents felt unable to trust their bank until they paid “sensible” bonuses to their staff, whilst 16% of all Barclays’ customers were actively thinking of leaving the bank.

According to a separate poll by YouGov, up to 14 million customers may move their bank account after reforms are enacted to make moving bank accounts easier. 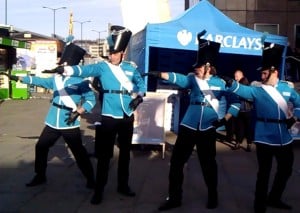