Barclays chief Antony Jenkins announced today that the bank would stop speculating on food, saying the practice is “not compatible with our purpose”. It is unclear whether the bank will continue to broker speculative deals for its clients. Campaigners have renewed calls for tough regulation to prevent speculation fuelling price spikes and contributing to the global hunger crisis.

Jenkins announced the move today as part of the bank’s strategic review. He said the end to the bank’s trading in agricultural commodities for speculative purposes was an example of Barclays “putting its words into action”. He told UK MPs last week that he would build a “socially useful” bank and “shred situations where we're short-termist, too aggressive and too self-centred.” But Jenkins made no commitment to change the bank’s speculation on other commodities, such as oil, which has a knock-on impact on food prices.

Until now, Barclays has been the leading UK bank involved in speculation on food including staples like wheat, maize and soy. The bank made up to an estimated Â£500 million from speculating on food in 2010 and 2011. 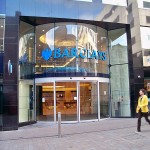 World Development Movement campaigner Christine Haigh said today: Â “As Barclays itself recognises, public opinion does not see food speculation as an acceptable activity. But without strong new regulation, Barclays is free to start speculating again at any time. Other banks, like world leader Goldman Sachs, are also free to carry on regardless. Strict regulation is the only thing that will prevent banks driving up prices and fuelling hunger.”

Chancellor George Osborne is to meet with European finance ministers in the coming months to agree proposals to curb speculation. But the UK government has so far opposed effective controls.