With the festive season now upon us, preparations are well underway, with sales (excluding petrol) last week up by 4.9 per cent on last year. Waitrose.com also performed well with online sales up by 34 per cent.

All Christmas meat and accompaniment orders (including website, phone and branch orders) are up 16 per cent compared to this time last year with customers ordering turkey and other seasonal meats in good time (the last day for Christmas orders is 15 December and 21 Dec for New Year food orders).

While turkey still holds the crown as the nation’s favourite for the Christmas table (turkey crown sales up this week by 14 per cent), other meats have also grown in favour. Overall pre packed beef sales rose by 9 per cent this week with orders up 49 per cent. Top beef sellers included bone in shin, sales of which increased by 233 per cent.

In fact, beef is the most popular alternative to turkey, as nearly a quarter (23 per cent) of Waitrose shoppers* have said they will try beef for a change this Christmas. 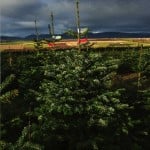 Seasonal meats, such as gammons and hams are also trading strongly, with orders up by 133 per cent.

Shoppers are not just concentrating on centre pieces for their festive feasts, as orders for accompaniments such as sausage meat are up 16 per cent.

Also heralding the start of the festive season was the arrival of Christmas trees in 180 Waitrose branches this week. This is the first year that Waitrose will sell Christmas trees, and sales are already well above expectations, as customers spruce up their home with British-grown festive foliage.

The pot grown Nordman Fir Christmas Trees or ‘ecotrees’ are sustainable, which means they can survive the festive season and then be grown in pots or the ground after Christmas, and used again. All the trees are sourced from the picturesque Black Isle, north of Inverness in Scotland.