The good news for the Chinese leadership is that their fiscal policies have paid off, producing both the world's second largest economy and the globe's leading creditor nation in less than a generation.

The less good news is that the country's hell-bent drive towards industrialization has brought in its train a host of collateral problems, not the least of which is pollution. Last month Beijing's air pollution soared past levels considered hazardous by the World Health Organization.

Prior to that, the government often played down the pollution in Beijing, insisting it was merely fog, despite evidence to the contrary that was plain for all to see. Earlier this year, following public pressure resulting from hourly air-quality readings first published in 2011 by the U.S. embassy in Beijing, which Chinese authorities had previously denounced as "foreign interference," the municipal officials took notice. On 12 January the air-quality monitor operated by the U.S. embassy in Beijing recorded a Particulate Matter PM 2.5 level of 886 micrograms a cubic meter, nearly 35 times what the World Health Organization considers safe.

On 5 February flights were grounded as visibility fell to around 200 meters across Beijing. Last month Beijing's Jiangong Hospital recorded a 30 percent spike in cases involving respiratory problems and the hospital's Emergency Department chief Cui Qifeng noted, "People tend to catch colds or suffer from lung infections during the days with heavily polluted air."

According to a Chinese Academy of Engineering specialist in respiratory diseases, speaking about Beijing's current pollution levels, "It (the pollution) is more frightening than SARS (severe acute respiratory syndrome). For SARS, you can consider quarantine and other means. But no one can escape from the air pollution and indoor pollution." The six-month SARS epidemic in 2003 killed 775 people in 25 countries.

Beijing alone now has five million cars choking the streets, spewing their exhaust into the air. More importantly, the nation's pollution problems are caused by China developing at a speed and scale unprecedented in history, which has produced widespread environmental degradation that the central authorities have been slow to acknowledge. Aside from vehicle exhaust, thermal energy plants utilizing the nation's poor grade coal power the country's factories, providing the heat for hundreds of millions of homes even as they belch toxins into the atmosphere.

And the toxic air threatens to become an international issue as well. Drifting across the Sea of Japan, the smog is now impacting parts of Japan (1), with the Japanese Ministry of the Environment's website on 5 February being overloaded. One ministry official, speaking on condition of anonymity said, "Access to our air-pollution monitoring system has been almost impossible since last week, and the telephone here has been constantly ringing because worried people keep asking us about the impact on health." 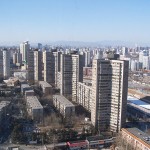 While the Japanese government remained discreet about air quality issues, Ministry of the Environment official Yasushi Nakajima was more blunt, stating, "We can't deny there is an impact from pollution in China." According to National Institute for Environmental Studies researcher Atsushi Shimizu, the prevailing winds from the west carry air pollution over western Japan. The pollution from China has exceeded government limits for particulate matter, which government concern focusing on particles 2.5 micrometers or less in diameter, whose concentration has been reported as high as 50 micrograms per cubic meter of air in northern Kyushu. The Japanese government limit is 35 micrograms.

Responding to the recent crisis, Beijing's city government ordered 103 heavily polluting factories to suspend production (nwasianweekly.com/2013/02/chinese-smog-forces-cancelled-flights/) and told government departments and state-owned enterprises to reduce their use of cars by a third.

More immediately, on 6 Feb. the Chinese government issued a timetable for its program to upgrade fuel quality, aiming to implement a strict standard nationwide by 2017, upgrading its standard V for automobile petrol, with sulfur content within 10 parts per million before the end of the year.

But the country's long term solutions will not be inexpensive – reducing the use of coal, forcing cars to use efficient pollution exhaust equipment, and developing mass transit options to reduce the country's rising love affair with the automobile.

China now has the wealth to implement such solutions –whether the political will is there is quite another matter. Should authorities not act, then they'd better ramp up the country's health insurance policies, as undoubtedly more and more workers will be reporting sick days.

Selling off our forests