According to a report in Arret sur Images and other media sources, the French President's comments were met with agreement from Barack Obama.

President Nicolas Sarkozy allegedly said to President Obama "I can't stand him anymore, he's a liar," to which Obama apparently replied "You may be sick of him, but me, I have to deal with him every day,"

The exchange between the two leaders at the G20 summit in Cannes was observed by journalists in another room with a continuous translation being fed to those present. 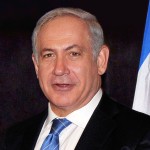 This report confirms recent speculation over the dire state of relations between the Israeli PM and other world leaders.

Israel may be running out of friends, however the west it seems is ready to stand by the Jewish state because of the apparent threat from Iran to the delicateÂ  Middle Eastern situation if Iran is developing nuclear weapons.

However questions will now arise as to whether the comments were directly related to Benjamin Netanyahu's position on Iran or his stance on the Palestinian full UNESCOÂ  (UN cultural organisation) membership bid.

Netanyahu's office has yet to comment on the remarks until verification is established.

One must ask if Western leaders are prepared to enter into military action against Iran on the request of a man who they perceive as a 'liar'.

Liz Hurley and Shane Warne kiss shows they are back on

Wayne Rooney jets off to Dubai for his birthday