Bhupen Khakhar: You Can't Please All

In June 2016, Tate Modern will present the first international retrospective of Indian artist Bhupen Khakhar (1934-2003) since his death.

Renowned for his vibrant palette, unique style and bold examination of class and sexuality, Khakhar played a central role in modern Indian art but was also a key international figure in 20th century painting. This exhibition will bring together the artist’s work from across five decades and collections around the world, including major works on canvas, luminous watercolour paintings and experimental ceramics.

Born in 1934 in Bombay, Khakhar lived in Baroda (Vadodara), where he completed an MA in Art Criticism at the Faculty of Fine Arts, Maharaja Siyajirao University, which was an important artistic centre. Khakhar continued working part-time as an accountant until his artistic career became established. After experiments with collage, Khakhar’s early paintings depicted the ordinary lives of workers and tradesmen, such as The De-Lux Tailors and Barber’s Shop 1972. As he gained confidence as a painter, Khakhar went on to combine popular and painterly aesthetics, absorbing diverse art-historical influences with ease, from Indian miniature and devotional iconography to 13th century Sienese painting and contemporary pop art. He evolved an engaging figurative style, part of a new wave of narrative painting and figuration that moved away from the modernist canon in vogue in Bombay and Delhi. 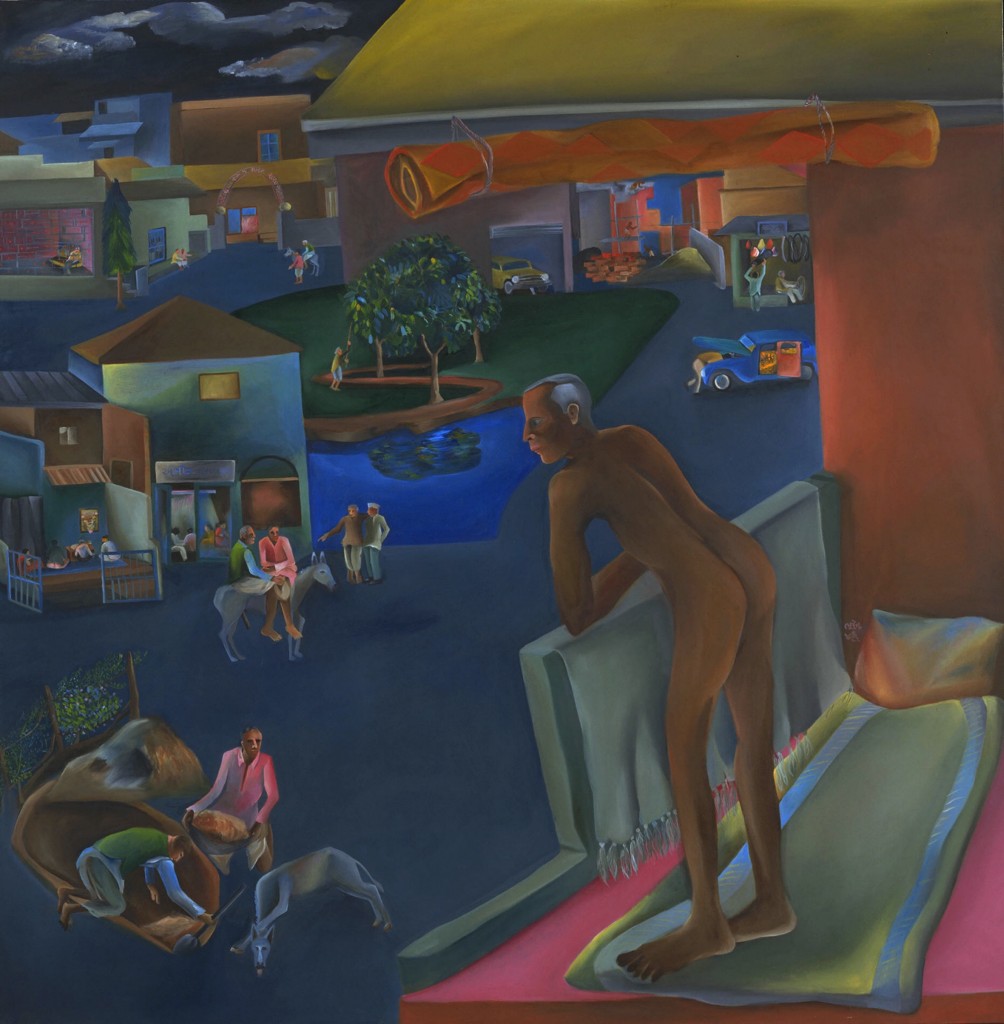 Khakhar was part of a lively community of artists and writers in Baroda where his home became a gathering place to meet and exchange ideas, even for visiting artists such as Howard Hodgkin and Dexter Dalwood. Khakhar spent six months as artist-in-residence at the Bath Academy of Art which cemented his links with contemporary British artists. Following his time in Europe, he painted the seminal work You Can’t Please All 1981, depicting a life-size naked figure on a balcony watching characters from an ancient Aesop fable. This confessional painting signalled Khakhar’s ‘coming out’ as a gay man and suggests the personal difficulties he faced at the time.

Khakhar was influenced by Gandhi and was committed to relating the truth as a guiding principle. He confronted provocative themes, particularly his homosexuality, with honesty, sensitivity and wit throughout his career. Works like Yayati 1987 show mythical figures in frank and fantastical portrayals of same-sex love. The large-scale diptych Yagnya – Marriage 1999 depicts a traditional celebration and feast in a small town with two men receiving a blessing, while smaller watercolours such as Flower Vase 1999 and Grey Blanket 1998 are more intimate visions of same-sex desire.

Also a writer and playwright, Khakhar was dedicated to storytelling and the illustration of the world in detail. He worked with Salman Rushdie on a special edition of two stories for which the artist produced a series of wood-cuts. Towards the end of his life, Khakhar also made works that expressed his very personal battle with cancer. Works such as Bullet Shot in the Stomach 2001 and  At the End of the Day the Iron Ingots Came Out 1999 show the realities of living with his illness in characteristically unflinching detail. The final work in the exhibition, the small gold hued painting Idiot 2003, expressively combines beauty, rage and irony as one character laughs at another’s grimace of pain.

Khakhar’s work was shown in Six Indian Painters at the Tate Gallery in 1982 and in Century City at Tate Modern in 2001. Tate acquired his iconic painting You Can’t Please All 1981 in 1996. Alongside the exhibition, other recent acquisitions from South Asia will be shown in the new Tate Modern’s displays this summer, including works by Sheela Gowda and Sheba Chhachhi.

Bhupen Khakhar: You Can’t Please All is curated by Chris Dercon, Director, Tate Modern and Nada Raza, Assistant Curator, Tate Modern. It will be accompanied by a fully-illustrated catalogue from Tate Publishing and a programme of talks and events in the gallery. The exhibition will travel to Deutsche Bank Kunsthalle in Berlin in November 2016.

Spitfire Audio: The best of British‏