Big Banks Only Good for Dividends?

Back in early August, I turned negative on the big banks and suggested that a bearish double-top was forming on the Bank Index chart. At that time, the Bank Index was trading at just over 65, as you can see on the chart below. (Read “Four Important Stock Charts Showing Warning Signs.”)

In early October, the Bank Index fell to around 61 (as indicated by the lowest shaded oval in the chart below). The index held and has since rallied back above the upper resistance, suggesting that it could be set for a breakout back up to its July highs. However, my feeling is that the easy money in the big banks has been made and going forward, the big banks are now dividend plays. 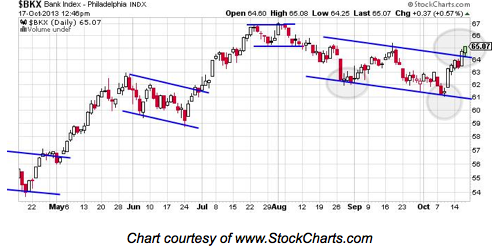 Investment guru Warren Buffett continues to like the big banks. I don’t blame him, as Buffett has made more than $5.0 billion in paper profits on his initial $5.7 billion investment in the ailing Bank of America Corporation (NYSE/BAC; dividend yield 0.30%), when the sector was in disarray following the Lehman Brothers collapse.

So far in the third-quarter earnings season, the big banks have largely delivered decent results.

Bank of America reported earnings of $0.20 per diluted share on year-over-year revenue growth of 5.3% to $21.7 billion, beating the Thomson Financial consensus earnings-per-share (EPS) estimate by $0.02.

JPMorgan Chase & Co. (NYSE/JPM; dividend yield 2.90%) reported a loss of $380 million, or $0.17 per diluted share, but this included a massive $9.15-billion pre-tax charge for legal and government fees. The adjusted earnings of $1.42 per diluted share handily beat consensus by $0.24. 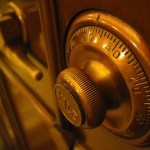 While the easy money in the big banks has largely been made already over the past five years since the financial sector collapsed, there are some gains left—just know that the capital potential is limited.

The big banks are no longer the trades that they have been in the recent past. Those looking at buying the big banks should be doing so for the dividends, and not for the capital appreciation potential. On this note, Bank of America and Citigroup haven’t been be given the go-ahead to increase their dividend payouts yet; understandably, they are the lowest as far as dividend yields versus the other big banks and regional banks. Having said that, I expect Bank of America and Citigroup to surge once they are allowed to increase their dividends.

So unless you are simply looking for income, the big banks should no longer be considered trades for capital appreciation.

It’s a dead heat: Labour lead the Tories by just one point