Big multinational businesses have signed an open letter on the need to 'promote the cause of EU membership' claiming that we wouldn't have it so good outside the Union.

But while they push for a continuation of more of the same they should spare a thought for the millions of people who live in this country's forgotten welfare ghettos and have no hope of sharing in the economic plunder that the heads of big business enjoy. Those people (and whole families) have been consigned to the scrapheap while the powers that be pretend that the EU benefits us all. Well it has not benefitted these people has it? And what's more I see nothing in the pipeline that will improve their plight.

A report out today from the Centre for Social Justice (Signed Off, Written Off) should be read by every politician and give them all nightmares tonight.

Whilst the rich and powerful politicians and business people have been strutting the world stage over the last couple of decades busying themselves making a world fit only for them, they have ignored and failed so many ordinary people at every level on a breathtaking scale.

And, as the report points out, this is not something that has happened overnight. This has been evolving over decades to the extent where families of three generations in some areas have never worked. How can it have come to pass that so many people have given up aspiring for something better? They cannot all be wasters.

All those politicians that profess to have gone into their chosen Westminster career to make the UK a better place should look at this report and ask themselves bluntly "what have I really done to try and prevent this?" Then they should say loudly that they are going to do something about it.

Just like so many people across the EU in countries like Spain, Greece and Cyprus who have been failed by their domestic politicians and sacrificed at the altar of an ever more intrusive EU, so have our own people been let down.

Instead of worrying about what the EU thinks or says, or what the needs of other countries are, our own politicians should be concentrating on the needs of the people that live within the UK.

The report itself does not link the benefit ghettoes with the failings of the EU, that is just my interpretation of events. All I see is that instead of spreading wealth the EU has concentrated it amongst a few to the detriment of so many and will continue to do so.

Here is the CSJ press release:

Some British towns and cities contain welfare ghettos where more than half the working age residents depend on out-of-work benefits, according to a major new investigation into the anatomy of the welfare state.

Parts of Denbighshire in Wales, Birmingham, Blackburn with Darwen, Wirral, Tendring and North East Lincolnshire are the worst affected, the report reveals.

The Centre for Social Justice (CSJ) report features a “league table” of the 20 neighbourhoods (Lower Layer Super Output areas, which have an average population of 1,614) in the UK where out-of-work dependency is highest.

The report, Signed On, Written Off, will be published in the week beginning Monday May 20, 2013.

Ranked on the percentage of people claiming out-of-work benefits, the top six neighbourhoods in England and Wales are: 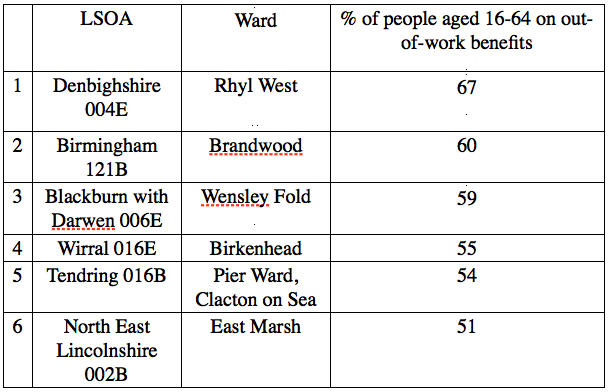 But if the rankings are calculated on average welfare spending per head, the top six local authorities are:

Across the country, 6.8 million people are living in a home where no one has a job. Nearly one fifth of UK children (1.8 million) are growing up in a workless household (the second highest rate in the European Union), and the vast majority of charities helping the unemployed surveyed in the report say that they know of families where two or three generations have no one in work.

Knowsley in Merseyside and Glasgow both had over 25 per cent of working age people dependent on out of work benefits during the economic boom in 2003 (25.3 per cent and 26.1 per cent respectively), compared with a national average at the time of 12.4 per cent. In Boston, Lincolnshire, dependency on benefits actually rose during the boom years.

The new CSJ report follows two previous studies, published in 2007 and 2009, that shaped the “make work pay” reforms introduced by the Coalition Government under Iain Duncan Smith’s leadership as Secretary of State for Work and Pensions. A further report, due next year, will draw up detailed recommendations for a second phase in the welfare revolution.

This report exposes the soaring cost of welfare. It has risen 18-fold since the inception of the welfare state in 1948, up from Â£11 billion to more than Â£200 billion today and accounts for 13 per cent of GDP, compared with 4 per cent in 1948. Despite the Government's welfare reforms, the bill is projected to go on rising to Â£218 billion by 2015/16.

Over the five years of this Parliament, the Government will spend over Â£1 trillion on social security, not far short of the total value of all goods and services produced in the UK in a year.

In a foreword to the report, CSJ Managing Director Christian Guy warns that a much sought-after resumption of economic growth is not guaranteed to curb the seemingly unstoppable rise in worklessness and welfare bills.

He points out that during the recent economic boom, welfare spending on people of working age rose by around 40 per cent in real terms, mainly because of the Tax Credits paid to people with a job. The Tax Credit bill surged from under Â£3.3 billion in 1997/98 to more than Â£20 billion in 2010/11.

By 2009, nine out of ten families with children were entitled to some kind of state support.

But Mr Guy says it is the waste of human potential rather than money that should keep politicians awake at night.

He said: “The welfare ghettos trapping as many as 6.8 million people are a national disgrace.

“They represent years of tragic failure and indifference from the political class. People in these neighbourhoods have been consistently written off as incapable and their poverty plight inevitable.

“Their lives have been limited by a fatalistic assumption that they have little prospect of anything better.

“While some campaigners accuse this Government of being callous for its benefit cap, the truth is there has been a much more damaging welfare cap in these communities for years – an unjust cap on personal potential.”

The report also reveals just how deeply entrenched worklessness has become. Despite 63 successive quarters of growth from the early 90s onwards, the numbers claiming out of work benefits stayed above 4 million.

Liverpool has 50 jobseekers claiming for 10 years or more; Tower Hamlets in London 40 such jobseekers; and Middleborough has ten.

The report backs the Government's efforts to make work pay and to move people off long-term dependency on state benefits into a job.

But it says that the present package of changes is only a start.

"Reform is now essential and can wait no longer. Some cite the spiralling costs of the welfare state as the key reason to act. These arguments are important as the Government now spends more than one in every three pounds on welfare.

"Yet the most powerful arguments for reforming welfare are not financial, but social. By focusing on income transfers rather than employment, our welfare system has made people dependent on benefits, trapping them in poverty and preventing them from achieving economic independence.”

Misleading Websites To Face The Squeeze