“The Centre for Cities report [1] finding that the economic gap between UK cities in the North and South has dramatically widened in the last 10 years is hardly surprising,” said Birmingham City Business School’s Dr Steve McCabe [2].

“It’s no surprise that London and the South-East dominates the economy in a way that is recognised by everyone, including government ministers.

“What we now see is that the UK has a ‘two-tier’ economy in which new jobs are overwhelmingly created in the South rather than the North – the proportion is 12 to one. Given the impending general election, those in cities in the north of Britain, such as here in Birmingham, need to make the case for change.

“The report makes the case that the next government must do things very differently through investment and planning. As many, including myself have consistently argued, Birmingham needs to place greater emphasis on rebuilding our manufacturing expertise that was so thoughtlessly undermined in the 1980s.” 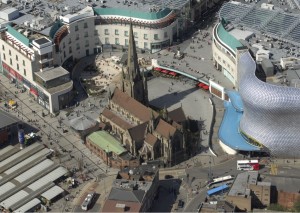 The Centre for Cities’ 2015 Cities Outlook report released today highlights the widening gap between the UK’s best and worst performing cities and towns, comparing average earnings, qualifications, broadband speeds and more. The Cities Outlook report finds cities in the South are out-performing those in the rest of the country in terms of population growth and in the number of jobs and businesses created.