The morning of July 17th, 2014, marked a big turning point for the crypto currency of Bitcoins. Many people may not know what this emerging technological advance is or even how it may affect their own personal lives, yet it is coming.

For the past 4 months, the Superintendent of Financial Services for the State of New York, Ben Lawsky, has been talking about Bitcoins and accepting any and every question that people would shoot at him in anticipation for proposing legislation to legitimize Bitcoins in the state of New York. July 17th he released a proposal to begin Bitcoin licensing [1].

Some may scoff at this because they do not really understand what Bitcoins are, where they come from, or how it will affect their day to day lives. Let me paint a picture for you in terms that anyone can relate to and relate this to you in relation to normal credit/debit cards we use daily.

Let’s say you could walk into a store and to pay you take a picture on your mobile device of a QR code, type into your phone the total amount and hit send. The cashier receives a text or email with a string of numbers that they input and you get a receipt.  Now imagine this service for free – that’s Bitcoin for ya.

This currency is literally like cash; if you have Bitcoins to make the purchase then you can pay with it. If you do not then the transaction will not go through. A service like this does not currently exist.

How can we expect Bitcoins to affect our day to day affairs?

First of all, banking fees will drop dramatically or even become non-existent. This currency does not have a business man or back-end server running it instead there is a global community of “Miners” setting their idle computers to calculate a complicated algorithm that makes up this “virtual bank”. 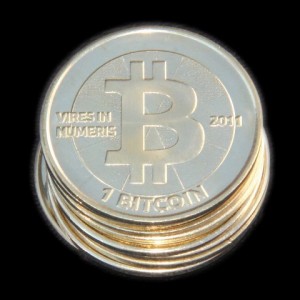 When a set of these computers finishes this task then the Bitcoin network uses this secure computing power to make the necessary transactions and the Miners get paid a small amount. Anyone with an internet connection can become a Bitcoin Miner and that is why it’s so revolutionary – currency run by normal people for normal people and is not regulated by governing agency.

Second, there is a large amount of the global population that does not have access to a local ATM machine to just make a deposit or withdraw some cash. Many impoverished nations have poor regulations or corrupted institutions that are altogether too unreliable to trust with your paychecks. This would be a way for them to have access to a simple and secure system that is not just made in America but functions globally.

Sending money internationally or even travelling and having to worry about exchange rates would be a thing of the past. As long as the vendor accepts Bitcoins, you can pay without needing anything more than your phone.

Lastly, there are many other small perks that will change the face of how we use our money. Imagine a protest happening all across the world and they have a sign with a QR code on it and you can take a picture and send them even the most minute amount of cash immediately e.g. sending .0025 of a dollar to a charity I just saw overseas.

This can also have repercussions on spam mail we receive. Imagine if we were to send a miniscule amount of money with every email we sent for verification. This would keep high volume spammers from sending out mass emails that only clutter up everyone’s Inbox.

There is an innumerable amount of ways this new technology will affect us. As for the morning of July 17th, it was the first legitimate step to bringing this widespread across the globe. Just as personal computers or even the internet had a slow start this too will not taking over anytime in the near future but when it does we will all feel the effect of the Bitcoin.

By Sam Hudgins of ZipZapInc.

The Sharing Economy – Scoundrel or Saviour?