'I know that a time is coming, all words will lose their meaning.'Â  So said The Arcade Fire in the song that shares its name with Charlie Brooker's series of new media, state-of-the-nation satirical dramas. The first of these, The National Anthem, rooted in theÂ spheresÂ of politics and rolling TV news, had so many references to 'helmet cam relay', 'D-notices' and uploads 'bounced via proxy' that, eventually someone concluded 'the world's bloody broken'.

If language was the first casualty of this dislocated world, then decency was not far behind.Â  Tasked by the captor of super-popular Princess Susannah (nominally Kate Middleton) with having sex with a pig on live television in ransom for securing the Royal's life, Prime Minister Michael Callow (nominally Blair or Cameron, depending on your bias) was deep in lose-lose territory.Â  Public opinion or self-respect; job or family; the pig or the chop.

Indebted to both The Thick of It and Drop the Dead Donkey for its layered, overlapping scenes of news rooms and cabinet office, The National Anthem bore all the media-savvy topicality that you might expect from Brooker.Â  The fictionalÂ news channel relied on viewer-generated content to fill its endless schedule, tit-for-tat bargains were struck by greasy palm-pilot and Callow's key advisors paid more notice to semi-literate comments on social network sites than to their own skills or experience.

For all that the salacious central premise is typical of Brooker's schtick, it is shame that more of the barbed fluency of his columns and presenting did not translate to the drama.Â  It was all a bit low-key, with most of the best gags being visual – the newsroom editor pre-ordering an obituary while still in his cycle-to-work lycra was an inspired touch.Â  Even when gold was struck, such as the kidnapper's filming demands being likened to the Dogme 95 Manifesto, much of the potency was lost in over-explanation.Â  What The National Anthem really required was a Malcolm Tucker, although it is not difficult to understand why Brooker avoided this route. 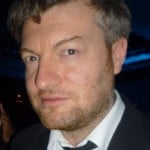 More successfully, the reactions of viewers throughout the day exposed the creeping promise of an 'event television' moment in which everyone was complicit, including a neat echo of Barack and Hilary watching the relayed fire fight at Bin Laden's compound.Â  When it arrived, Brooker's twist was knowing, direct and two-fold, if a little tidy to be truly satisfying.Â  The real power was achieved in the understated flash-forward conclusion, in which the modest political gains Callow has made are set in direct opposition to what has been lost, at least behind closed doors.

Ultimately, The National Anthem had more to say about the disconnection of the closest personal relationships than it did about networks or communities – it is a pity that this was so rarely heard above the noise of the humiliating sideshow.