Another black triangular shaped UFO has been spotted in the Brecon Beacons in an area with a reputation as a hotspot for UFO sightings.

The Economic Voice's very own Richard Henley Davis and his family witnessed the strange object moving about on Tuesday at 17:25 pm flying across the A40 just before the junction for the B4558.

Richard said "We were travelling back home from a family meal in Brecon in the dark when my youngest son pointed out a two very bright lights moving towards us from the direction of Cantref advancing at anÂ approximated speedÂ of 60mph in the direction ofÂ Groesffordd."

"The lights appeared to be facing down towards the ground and there was no noise coming from the craft, it was silent and my wife found this to be veryÂ unnerving, as did I."

"I caught a glimpse of a green light on the underside and my initial thought was I must be looking at the starboard light from aÂ Hercules flying low on exercises as they frequently do in the Brecon Beacons, however there were no red port lights and then I noticed that there were another two green lights all at the other corners of what turned out to be a large black triangular shaped craft."

"Living in the Brecon Beacons we are used to low flying military aircraft and the noise from them can frighten the daylights out of you, but whatever this was had an eerie silence. I have no idea what it was and hope for a logical explanation."

"Having written quite disparaginglyÂ about other people's accounts of witnessing UFOs, it was a bit of poetic justice for myself to see one and my phone was in myÂ pocketÂ as I was driving so there was no opportunity to take a photograph."

34 year old Project Manager, James Clark and his partner 29 year old Laura Jones who is a graphic designer for the Brecon and Radnor Express also witnessed the strange craft.

Clark said "We saw what looked like a black, triangular shaped aircraft flying very low and silently above us at speed with lighting on each of its three corners,"

Laura added "We both said we had never seen anything like it before,"

Both Dyfed Powys Police and the Army denied there being any of their respective aircraft being in theÂ vicinityÂ at the time of the sightings.

However this sighting is not the first in the Brecon Beacons area and there are frequent reports of UFO sightings.

Back in 2008 Dr Simon Griffey from Cardiff University witnessed strange lights in the sky near Talybont-on-Usk Â just 4 miles from where Richard and his family had their close encounter. 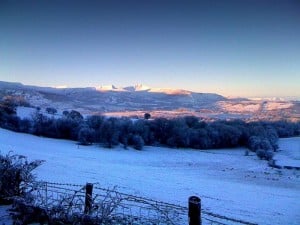