Taking place every Thursday across four weeks from 19 November to 10 December 2015, each artist is invited to spend a week working in the space at Tate Modern, before presenting their performance to camera. This will be streamed live across the world on Tate’s YouTube channel and Tate’s website. Audiences are invited to join in the conversation with others during the performance and to pose questions to the artist and curator afterwards in a live Q+A via Twitter and Facebook using the hashtag #performanceroom. 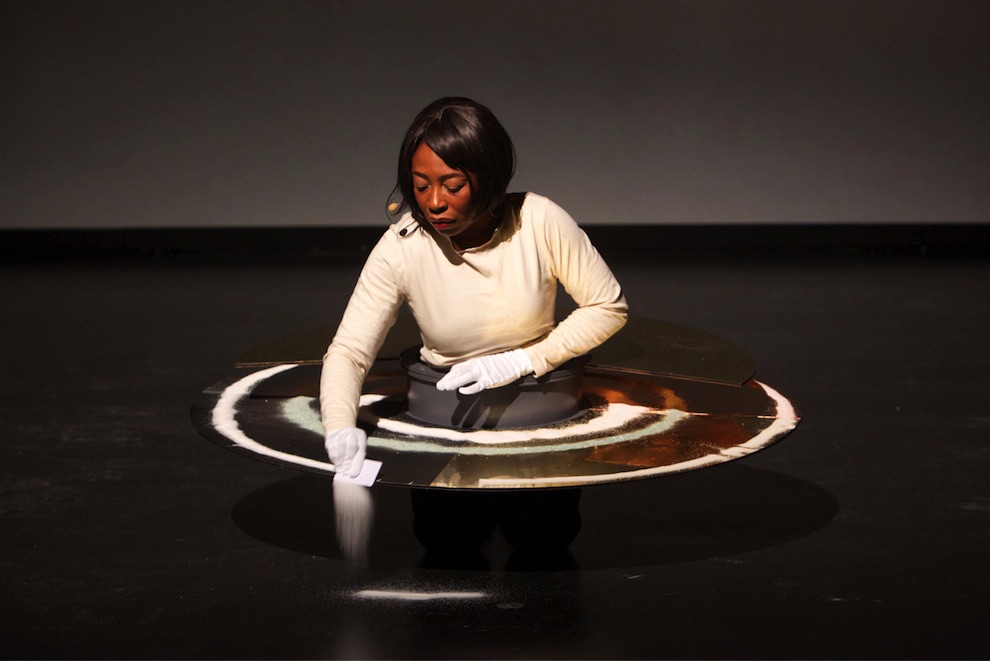 Mary Reid Kelley will create a video inspired by Thomas Hood’s 1844 poem The Bridge of Sighs, in which a woman commits suicide by jumping into the Thames. Reid Kelley combines painting, performance, and her distinctive poetry in polemical and stylized videos. Made in collaboration with her partner, Patrick Kelley, her videos have been exhibited at the Hammer Museum, the ICA Boston, the Neuer Kunstverein Wien, and SITE Santa Fe. She is the recipient of the 2011 Rome Prize, the 2013 Louis Comfort Tiffany Award, and the 2014 Guggenheim Fellowship. Reid Kelley lives and works in upstate New York.

Otobong Nkanga will refer to the format of early silent film to present a number of excerpts from her own performance history over the past 10 years. Her multidisciplinary practice in drawing, photography, installation and video is focused on the related themes of environment, architecture and history. Nkanga's recent shows and performances include Comot your eyes make I borrow you mines, Kadist Art Foundation, Paris (2015), Glimmer Fragments – Symposium "Landing and confessions", Stedelijk museum, Amsterdam (2014), Sharjah Biennial 11, United Arab Emirates, (2013) and Across the Board: Politics of Representation, a 2012 presentation in The Tanks at Tate Modern exploring questions of value. Nkanga was born in Nigeria and lives and works in Antwerp, Belgium.

Using theatre, drawing, literature and sculpture, Naufus Ramírez-Figueroa’s work conjures live and sculptural representations that explore themes of loss, identity and displacement. For this new commission he will explore the history of leftist theatre in Guatemala in the 1970s. He has participated in various solo and group exhibitions including A Chronicle of Interventions at Tate Modern (2014), and the Bienal do Mercosul (2015). He is a recipient of a Guggenheim fellowship, a Franklin Furnace award and an Akademie Schloss Solitude fellowship, and recently won the 2015 ARCO Region of Madrid Award for Young Artists. Naufus Ramírez-Figueroa will have a solo exhibition at Gasworks, London, from 26 November 2015 to 9 January 2015. He lives and works in Guatemala City.

Michael Smith is a video, performance and installation artist known for his eponymous performance personae: Mike, the hopeful innocent who continually falls victim to trends, and Baby Ikki, the melancholic toddler distracted by anything in his line of vision. Both characters are vehicles for Smith to comment on absurdities in contemporary culture. Building on this, in his new commission Smith will explore themes of aging and youth. Smith’s impressive performance and exhibition history since the mid-1970s includes the Whitney Museum, MoMA and the Baltic Centre for Contemporary Art. Recent solo exhibition include Performing John Cage, MoMA, New York (2014); Tramway, Glasgow International (2014), and Hales Gallery, London (2013). Smith will have a screening of his work, spanning over 30 years, at Tate Modern’s Starr Auditorium on Friday 11 December, 19.00 – 21.00, and a solo-presentation of his work at South London Gallery, London, from 10 to 12 December 2015. He lives and works in New York and Texas. BMW Tate Live 2015: Performance Room presents an innovative format which offers global audiences the chance to experience art in the gallery. The programme asks artists to develop work especially for online viewing, conceived in response to this unique mode of presentation. Since the first Performance Room in 2012, 15 brand new online commissions have been created. This year’s four performances will join this online archive.