* Two fifths are overweight according to their BMI

* Half of men's waists have increased by four or more inches since they were 25, compared to one in eight women who have gone up three dress sizes

No matter how old you get, people still want to look their best as research by Saga Health Insurance shows that half of over 50s think they could do with losing a few pounds and half say they exercise regularly to either control or lose weight.

The average man over 50 is 5ft 9 inches tall and weighs 13 stone 7lbs, while the average woman measures 5ft 4 inches and weighs around 11 stone. So exercising could be a good way for weight conscious over 50s to shift a few pounds as two fifths are overweight according to their BMI.

The most common ways the over 50s maintain or lose weight are; walking regularly (88%), having sex often (20%) and swimming a couple of times a week (15%). However, it appears that the over 50s have joined the rest of Great Britain and gone cycling mad, as one in seven say pedalling through the countryside keeps them fit.

The over 50s motto could be "move more and eat less", as they team exercising with dieting. On average people have been on nine diets in their lifetime, with women being the most determined to not let themselves go. The Saga survey suggests women have tried every diet going as they have been on 11 diets in their lifetime, compared to men who are part time dieters, averaging six.

However, the over 50s know that eating well is just as important as eschewing second helpings. A quarter of people say they have at least five or more portions of fruit and veg a day suggesting they know how to fuel their body so they can keep up with their exercise regime.

Some over 50s keep a regular eye on their weight with half of people saying they weigh themselves at least once a week, with one in ten of those stepping on the scales every day. However, Saga estimates that 2.5 million4 over 50s might judge weight loss by how their clothes fit as they don't even own a set bathroom scales; with 50 to 59 year olds being the least concerned with stepping on the scales on a regular basis. 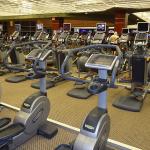 Women keep a closer eye on their weight, with 48% weighing themselves regularly compared to 42% of men2. This might explain why men are more likely to be carrying that spare tyre, as two fifths are overweight compared to a third of women. In fact, age appears to have played havoc with men's figures as almost half say that their waist has increased by four or five inches since they were 25 years old, compared to only one in eight women who have gone up the equivalent three dress sizes.

Paul Green, director of communications at Saga, commented: "Carrying those extra pounds can put people at risk of developing a range of health problems – especially in later life. Carrying a bit more weight could explain why fixing hips and knee joints are amongst the most frequent claims on Saga's health insurance."

The free online Saga Health Club can help over 50s evaluate their lifestyle and look at their future risk of developing diseases such as heart disease, stroke and diabetes. All people have to do is visit www.sagahealthclub.com and fill out a simple questionnaire about their health, family history, eating and exercise habits. The health club can then give over 50s a 12 week action plan and regular updates with useful information such as exercise and nutrition tips to help them improve their health.

Which is the best UK region for your next career move?