This is as generally expected and we’re seeing a little buying of the Pound in the wake of no bigger increase, which some had forecast, as per my report this morning.

The full statement from the BOE reads:

The Bank of England’s Monetary Policy Committee today voted to maintain the official Bank Rate paid on commercial bank reserves at 0.5%. The Committee also voted to increase the size of its asset purchase programme, financed by the issuance of central bank reserves, by Â£50 billion to a total of Â£325 billion.

In the United Kingdom, the underlying pace of recovery slowed during 2011, with activity falling slightly during the final quarter. Some recent business surveys have painted a more positive picture and asset prices have risen. But the pace of expansion in the United Kingdom’s main export markets has also slowed and concerns remain about the indebtedness and competitiveness of some euro-area countries. A gradual strengthening of output growth later this year should be supported by a gentle recovery in household real incomes as inflation falls, together with the continued stimulus from monetary policy. But the drag from tight credit conditions and the fiscal consolidation together present a headwind. The correspondingly weak outlook for near-term output growth means that a significant margin of economic slack is likely to persist.

CPI inflation has fallen back from its September peak, declining to 4.2% in December. Inflation should continue to fall sharply in the near term, as the increase in VAT in January 2011 drops out of the twelve-month comparison. Inflation is then likely to decline further as the contribution of energy and import prices diminishes, while downward pressure from unemployment and spare capacity continues to restrain domestically generated inflation.

In the light of its most recent economic projections, the Committee judged that the weak near-term growth outlook and associated downward pressure from economic slack meant that, without further monetary stimulus, it was more likely than not that inflation would undershoot the 2% target in the medium term. The Committee therefore voted to increase the size of its programme of asset purchases, financed by the issuance of central bank reserves, by Â£50 billion to a total of Â£325 billion. The Committee also voted to maintain Bank Rate at 0.5%. The Committee expects the announced programme of asset purchases to take three months to complete. The scale of the programme will be kept under review.

The Committee’s latest inflation and output projections will appear in the Inflation Report to be published at 10.30am on Wednesday 15 February.

The minutes of the meeting will be published at 9.30am on Wednesday 22 February

The Governing Council of the ECB has also decided today to hold the interest rate on the main refinancing operations and the interest rates on the marginal lending facility and the deposit facility at 1.00%, 1.75% and 0.25% respectively. At the press conference the president of the ECB Mario Draghi has said that there are downside risks but that Euro area economy does show ‘signs of stabilisation’.

Forecasters were divided as to whether they might cut by 0.25% and we’ve seen a small rally in the Euro to test higher levels seen earlier this morning.

ECB’s key observations in their statement and press conference answers are:

Inflation to fall below 2% after staying above for several months.

Will continue to support financial sector via LTRO.

ECB to avoid “legal tricks”: Will not share Greek losses, such talk unfounded.

Will not give money to Greek programme, would violate monetary financing.

A well-functioning financial system does not need non-standard measures, they are temporary in nature.

Euro area “as a whole” in better budget shape than US or Japan.

Stresses in financial markets have diminished. 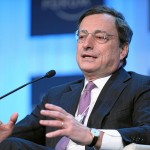 I’m not sure whether I agree with the last comment but, hey, it’s all relative!Â  ECB President Draghi is keeping his cards close to his chest at the press conference currently in progress and refused to answer any questions on the Greek debt deal of EFSF. He has also added that an interest rate cut was not discussed at their meeting.

US weekly jobless claims just out showed a decent fall and this has given the US $ a bit of a fillip.

Should be a scrappy and volatile session.

At my desk if you want to discuss strategy or place orders.