Boosts in Crude Processing Lead to Gains in WTI

U.S. refineries have boosted their processing of crude oil to the highest rate this year causing West Texas Intermediate to gain for a fourth day. Industrial profits in China, the second largest oil consumer in the world have also increased. Futures rose approximately 0.7% in New York which is the biggest increase since May 20th. U.S. refineries were operating at 90.2% combined capacity the previous week even with a rise in stockpiles. Chinese industrial companies reported a 16% increase in profit from May of last year according to the National Bureau of Statistics in China. WTI broke a technical-resistance level that capped gains in prices last week.

Ole Hanson, Saxo Bank’s head of commodity strategy said they have spent the past 4 days recuperating after what they lost over 2 days last week. Hansen also said that the market is recovering to the level before the selloff last week which have prompted refineries to return from maintenance to begin runs. August delivery for WTI gained 64 cents to $96.14 per barrel on the New York Mercantile Exchange. Futures have dropped by 1.3% in the second quarter. August settlement for Brent rose by 0.8% to $102.48 per barrel on the London ICE Futures Europe Exchange. The level of the European benchmark hit a premium of $6.35 for WTI futures and the traded volume was 32% which is lower than the 100 day average (chart below, courtesy of Banc de Binary: www.bbinary.com/). 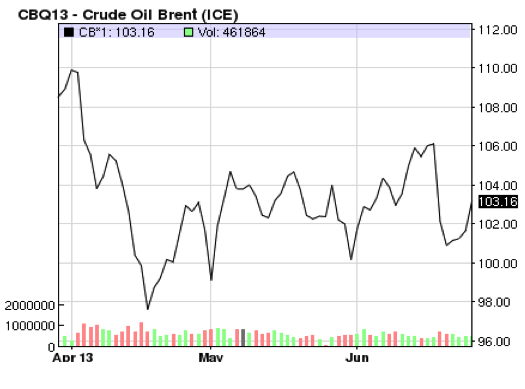 U.S. refineries increased their operating rates by 0.9% by June 21st according to the Energy Department’s Energy Information Administration. Processing units are generally restarted in spring after sitting idle for winter maintenance when attention moves from heating oil just before peak demand for U.S. gasoline. The summer peak occurs from late May to September. U.S. crude stockpiles increased by 18,000 barrels according to the EIA. Supplies were expected to decrease by 1.75 million barrels as indicated by a median estimate of Bloomberg analysts.

Gasoline inventories increased by 3.7 million barrels and they were forecast to increase by 875,000 barrels. Distillate supplies rose by 1.6 million barrels compared to a predicted increase of 650,000 barrels. CMC Market’s chief market analyst Ric Spooner said inventories remain very high as we move into the summer season which is a negative development. The U.S. was the largest user of oil last year and made up 21% of the global demand according to the BP Statistical Review of World Energy as China accounted for 11% of the demand. WTI continues its rally after futures broke through the technical resistance barrier. The August contract closed above its 30 day Bollinger Band. This was the first time this occurred since June 19th. Investors usually purchase contracts when chart resistance fails.

In June, U.S. crude prices rose by 4.3% due to new concerns that the conflict in Syria will grow and impact on oil supplies in the Middle East. The U.S. is planning to give Syrian rebels arms in a month according to a Wall Street Journal report that cited officials and diplomats who have knowledge of the plan. The U.S., along with 10 other countries stated they will increase their support of rebel forces in Syria but did not provide any further details. The CIA has started moving arms to Jordan from a number of secret warehouses according to the Wall Street Journal. Ahmad Bakhshayesh, an Iranian parliament member said elected Iranian president Hassan Rohani will not alter the country’s policy of supporting Bashar al-Assad in the Syrian civil war.

Japan has doubled its Iranian crude imports in May compared to a year earlier in spite of the sanctions placed on Iran. Imports increased to 222,000 barrels per day according to the Ministry of Finance in Japan. A continued increase on an annual or quarterly basis is not likely as Japanese buyers will be able to find alternative supplies according to Osamu Fujisawa, an energy economist who worked for Showa Shell Sekiyu K.K. and Saudi Arabian Oil Co. Russia is planning on reducing the shipment of oil by 1 million barrels a day from the port of Primorsk. Igor Dyomin, an OAO Transneft spokesman said that a few tankers are standing by in Primorsk after loading was stopped because of a tug boat dispute.

By Marcus Holland – Editor of ForexBonus.co.uk.