Boris backs competition to find business stars of the future

Mayor of London, Boris Johnson, has backed a nationwide competition which aims to find the best self-employed people operating in the UK and boost their businesses with a grant, business support and financial advice worth tens of thousands of pounds.

The number of self-employed professionals has reached a record high of 4.58million in the UK alone according to recent ONS statistics.

With this huge rise, the 15 for 2015 competition is searching for the UK's best independent business minds to give them the support they need to flourish. 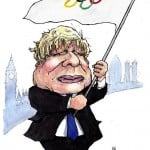 "London is home to tens of thousands of enterprising people who have taken the plunge and set up their own business when it would have been much less risky for them to get a regular nine to five job. These entrepreneurs help to make London the business capital of the world and a true commercial and economic powerhouse. 15 for 2015 aims to make life a little easier for those adventurous independent professionals from throughout the UK who want to control their own destiny and will also unearth some of our business leaders of the future."

"It is more important than ever before to give the growing self-employed army the recognition and support they deserve and it's fantastic that the Mayor of London has backed this sector so passionately. It's great to see Mr Johnson acknowledge that they are Britain's wealth creators who have made the brave decision to take their career into their own hands."