The refusal by the Mayor of London to pay his American taxes has been hailed as “noble” and “brave” by the boss of one of the world’s largest independent financial advisory organisations.

The comments from Nigel Green, founder and chief executive of deVere Group, which operates in 100 countries and has $10bn under advice, come after Boris Johnson was characteristically forthright during an NPR interview regarding his views on America’s controversial global tax law, the Foreign Account Tax Compliance Act, or ‘FATCA’, which came into effect in July.

Mr Johnson, who was born in New York, described it as “outrageous” that the U.S. is taxing American citizens, so-called ‘accidental Americans’ and green card holders on their global income.

The Mayor has not lived in the States since he was five years old, but neither has he relinquished his U.S. passport as he indicated he might back in 2006, and as such the Internal Revenue Service (IRS) is now seeking tax on the sale of his UK home.

Mr Green affirms: “I welcome the Mayor of London joining the growing army of voices on this issue. 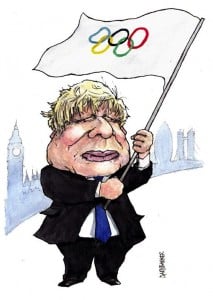 “Boris Johnson’s noble and brave stance against this fatally flawed, imperialistic and economically dangerous law, means he is legally in the wrong, yet morally he is right.

“Whilst I wouldn’t advocate that individuals do not comply with FATCA – instead they should explore all the available options to mitigate its adverse effects – I do hope the Mayor’s apparent FATCA crusade will serve as a call to arms to other high profile personalities to publicly express their opposition to this highly-polemical new law.”

The deVere Group CEO says there are many reasons to oppose FATCA.

“FATCA brands Americans and ‘accidental Americans’ who choose to live and/or work overseas, as financial pariahs.  U.S. expats are now routinely rejected from foreign financial institutions (FFIs), such as banks in their country of residence, because FATCA’s extensive and costly rules mean Americans are now usually perceived as more trouble than they are worth.

“Similarly, American firms operating in global markets are now also often hit with a leprosy-like status.  Clearly, this can only be detrimental to their global competiveness and could, in turn, hit American jobs and the long-term growth of the U.S. economy.

“In addition, questions should be asked too about the imperialistic traits of FATCA.  Governments and foreign financial institutions have been coerced into complying with FATCA’s costly, lengthy, privacy-infringing, sovereignty-violating regulations by the U.S. – or have to face heavy penalties and be, in effect, frozen out of U.S. markets.”

Mr Green continues: “The citizen-based U.S. tax system, which taxes citizens no matter where they live and work in the world is draconian and utterly inappropriate for today’s increasingly globalised world.

“Almost every other national government in the world – with the exception of the tiny African state of Eritrea – adopts a residence-based tax regime.

“The U.S. should align itself with the other major nations and put an end to the harsh double taxation imposed on U.S citizens and business owners overseas, who include millions of middle class Americans – and not just the super wealthy as is so often reported in the media.”

The number of Americans renouncing their citizenship, according to the U.S. Treasury Department, rose by 220 per cent in 2013.  Many experts say this is a direct result of FATCA’s serious, unintended consequences.

Households could be left with just £50,000 to see them through retirement