25 Years of the BP and Tate partnership

Tate Britain's spring season of BP Spotlights is announced today. The BP Spotlights are displays of Tate collection works that explore a particular theme or focus on the work of one artist or group of artists.

This season there are BP Spotlights that look at star portraits that fell out of favour as their subjects were forgotten, depictions of nymphs, satyrs and other mythological beings at the turn of the 19th century, the period when the term 'nymphomania' was coined; and a display about life drawing and artists' models. There will be rooms devoted to the work of Alan Davie, Andrea Büttner and photographer Chris Killip. And Source, the first display at Tate Britain curated by and for young people, will explore connections between the 19th century presentation of art and the proliferation of images in digital culture today.

The word 'nymphomania', which first appeared in English in 1769, became familiar in Britain at the same time that a revived interest in the art of antiquity was sweeping the nation. Bodies of Nature includes works made between 1780 and 1840 of nymphs, satyrs and other mythological beings whose origins in the classical world legitimised their unabashed sensuality. In a period marked by revolutions, catastrophic wars and social and political unrest, these artworks provided an alternative to the austere idealism and morality of traditional high art.

The Craze for Pastel

The Craze for Pastel marks Tate's recent acquisition of Ozias Humphrey's pastel portrait Baron Nagell's Running Footman c.1795, a rare example of an 18th century portrait of an identifiable black Briton. This display will explore the emergence of pastel in the 18th century and its phenomenal success as a fashionable alternative to oil paint. Tracing its evolution from natural chalk – long used for figure and landscape sketches – into a full colour medium, the display will include many rarely exhibited collection works. Experimental pastel drawings by Thomas Gainsborough sit alongside finished portraits by leading pastellists such as John Russell and Daniel Gardner. The display aims to demonstrate the central importance of the medium to the increasingly competitive world of 18th-century British art.

Forgotten Faces turns the clock back a hundred years to discover portraits and figure paintings that were once the stars of the Tate Gallery but later fell into disregard as their subjects were forgotten. Offering an insight into the Edwardian world, taste, and the gallery's history of collecting, it will include Charles Wellington Furse's Diana of the Uplands, which once rivalled Millais'sOphelia in popularity. Many of the works on show have been in store for several decades, two of which – Emil Fuchs's portrait of Sir Joseph Duveen and James Havard Thomas's bust of Mrs Wertheimer – have been restored especially for this display.

Reception, Rupture and Return: The Model and the Life Room

Reception, Rupture and Return: The Model and the Life Room examines the role of the life model for the artist and the changing status of life drawing from the 19th to the 21st centuries. The display will include unique perspectives of three artists' models from the Tate archive. It will explore themes such as the model as a person, as a political vehicle, as a challenger to convention, and the rethinking of the model during the inter-war and post-war periods. 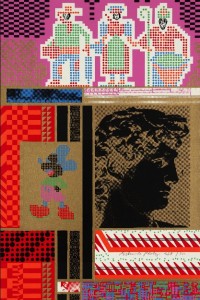 Source is curated by Tate Collective London, a group of young creatives aged 15 to 25 years. It will be the first display at Tate Britain curated by and for young people. The display will explore the connections between the dense 19th century 'salon hang,' and the visual culture seen in the digital world today on platforms such as Tumblr, Instagram and Pinterest. The display will include Tate collection works by Patrick Caulfield, Edward Paolozzi and Sarah Lucas, alongside user-generated online content, provoking questions about the historical value of originality and authenticity.

Alan Davie (b. 1920) was one of the first post-war British artists to develop an expressive form of abstraction. This display brings together paintings from Tate's collection and seldom-seen material from the artist's archive. His kaleidoscopic canvases, the result of an improvisatory process that the artist relates to his love of jazz, form a complex web of imagery that evokes a magical world of imagination and personal mythology. As well as harnessing his interest in Zen Buddhism and the mystical world of primitive signs and symbols, Davie's canvases emphasise the materiality of paint and the physical gesture of the artist, their dense networks of unconscious forms overlapping and obscuring others until the final composition is resolved.

The photographer Chris Killip (b. 1946) helped shape our visual memory of Britain in the late 1970s and 1980s.This display will include some of most significant series. These include the artist's first series of portraits and landscapes taken in his native Isle of Man, portraying Manx work and culture. Shown in contrast are Killip's widely acclaimed photographs of the north east of England: stark black and white images highlighting the decline of the manufacturing towns and of the docks and the social disintegration and hardship that ensued. Key images depicting coastal communities living in Skinningrove and Lynemouth during the early 1980s are also included in the display, along with a series of photographs of the workers at the Pirelli factory in Burton.

The work of Andrea Büttner (born 1972) encompasses woodcuts, glass painting, sculpture, video and performance. She creates connections between art history and social or ethical issues, with a particular interest in notions of poverty, shame and dignity. A key work in the display, the video Little Sisters: Lunapark Ostia 2012, focuses on a sisterhood of nuns who manage an arcade in a small amusement park in Ostia, near Rome. In it, the nuns speak about their work and respond to questions posed by Büttner concerning happiness, spirituality and spectacle.

The Nature of Common Life: Drawing the Everyday 1800–60

Drawing heavily on the Oppé Collection of works on paper, this display highlights the preoccupation with everyday life seen in the work of early nineteenth-century artists such as William Mulready, JMW Turner, John Varley and David Wilkie. The works, in a range of media and including several never before displayed, demonstrate artists' compulsion to observe and depict the world around them, from the bustle of street life to the intimacy of the family home.

2014 marks the 25th anniversary of the BP and Tate partnership. Across this time BP has enabled Tate Britain to present the national collection of British Art to the public for free. Over 35 million people have now seen the BP Displays since they were unveiled in January 1990 and BP's continued support allows Tate to regularly change the displays so the public can enjoy the breadth of the world's greatest collection of British Art.

BP has supported arts and culture in the UK for over 35 years and currently focuses its support on long-term partnerships with four world class institutions; The British Museum, The National Portrait Gallery, The Royal Opera House and Tate Britain. More than 50 million people across the UK engaged with BP supported activities during this time. BP's investment of almost £10 million in extending its long term partnerships until 2017, represents one of the most significant long-term corporate investments in UK arts and culture.

British Folk Art at the Tate