The British Property Federation (BPF) has welcomed the opportunity it has had to comment on the terms of a Company Voluntary Agreement (CVA) proposed today by Café Rouge Restaurants Ltd, Café Rouge Limited and Bella Italia Restaurants Limited and its creditors.

It has praised the CVA supervisor Zolfo Cooper's commitment to open engagement and feedback on its proposal. The CVA will enable all restaurants included in Café Rouge Restaurants Ltd, Café Rouge Limited and Bella Italia Restaurants Limited which are all part of the Tragus Group, to avoid going into administration and continue to trade in all of its occupied units, of which there are over 250 within the UK.

The BPF, who consulted on the agreement, has always advocated open dealings with CVAs, emphasising that they should be considered a last resort, and always dealt with on a case-by-case basis. 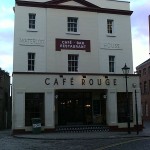 "We were glad to be invited to consult on this CVA, as it shows the Zolfo Cooper's commitment to working in a transparent manner. CVAs often mean landlords suffering the lion's share of any loss and for fairness's sake it is important they feel they are being dealt in a transparent manner. It will be for the individual landlords affected to vote on the CVA, but by consulting, the CVA supervisor has sought to ensure this proposal contains no hidden traps and increased its chance of success."

"Once again we have seen a constructive and transparent dialogue with an insolvency practitioner seeking to take account of landlords' concerns. Whilst the BPF can neither endorse nor criticise the terms of the offer contained in this CVA proposal, landlords can hopefully feel confident that the CVA supervisor has taken account of their interests, and done their best to minimise the impact of the restructure where possible."

Understanding your buy to let risk – 3 tips for success

The Right Time To Invest In Property In Spain, According To Spain Buying Guide and Partners