A bold statement, but hardly a shocking one when you consider the aim of a bout is to knock your opponent unconscious, or at least get more punches into key areas than they do.

Boxing causes brain damage – that’s a fact – but banning boxing is not the way forward.

So who is right – those who are for or against the sport? It’s almost impossible to call, but let’s have a look at the arguments for and against a ban…

Although there have been some high profile cases of boxers suffering significant brain damage and even dying in the ring, these aren’t the only reasons those who oppose the sport want it banning. 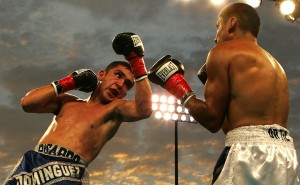 Continued blows to the head can cause blood vessels in the brain to either fully snap and haemorrhage or lead to microscopic tearing of the tissue around the vessel – and its these smaller-scale injuries that can lead to long-term damage.

It’s this tearing that many neurologists  assert is responsible for the mental problems that trouble boxers later in life and lead to a demise into depression, drug and alcohol abuse and violent tempers – all of which are consistent with underlying damage to the brain’s frontal cortex.

And this form of dementia, known as dementia pugilistica or ‘punch-drunk syndrome’ is thought to affect between 15% and 20% of professional boxers. Even the majority of legal experts such as Barlow Robbins, who specialise in brain injury, recognise the health problems this type of activity causes.

So how can those who are pro-boxing possibly oppose that weight of scientific evidence?

Boxing isn’t simply a matter of battering an opponent into submission – though that’s certainly part of it – it’s a tactical sport, where two super-fit and finely-tuned athletes have to outwit each other as much as out-punch each other.

And the common misconception that boxers are mindless thugs – why else would anyone want to step into an arena with the sole intention of battering a similarly mindless thug? – doesn’t stand up to scrutiny as boxers are driven individuals who must train obsessively to make it in their sport.

Even at an amateur level, there’s no just turning up and seeing what happens – as amateur footballers the nation over do every weekend – if a boxer has no time for the strict training and coaching regime, that boxer won’t be stepping into the ring.

Just like any other sportsmen and women, boxers make a conscious decision to take up the sport, they enjoy getting into the ring, it can help with confidence and self-esteem issues, and it can be a way out of an underprivileged background and the potential of a life of crime.

But are any of the above reasons enough to outweigh the argument to ban it? Probably not, but the argument against prohibition probably is…

Whenever a boxer suffers a brain injury, or is killed in the ring, it’s big news that reverberates way beyond the boxing community – it doesn’t happen often, but it still happens too often, and we’re boxing to be banned it would probably happen even more often.

If boxing was banned, it would most likely be driven underground – as it was in the 19th and early 20th centuries when prohibition [1] was tried in various US states – and this would lead to less regulation, fewer medics on hand, and a sport where participants were even less safe.

So far from banning the sport, it needs to be made safer, with the risk of harm minimised even further – so, as GB Boxing suggests, anyone wanting to take up the sport should only join clubs that are regulated by England Boxing, Boxing Scotland and Welsh Boxing and be taught by qualified trainers who respect the sport, understand the importance of safety and place paramount importance on the health and wellbeing of participants.

And proper training, learning how to run a safe gym and knowing the right time to throw the towel in is paramount to the safety of boxers as they can often be on the end of bigger blows in sparring than they are in the ring.

Incremental weigh-ins could stop the practice of boxers shedding fluids 24-hours before a fight, something that can lead to a greater risk dehydration and subsequent brain injury.

And while some may call for the wearing of protective headgear across the board, from amateur to professional, it has been seen to have a negligible effect when it comes to the safety of boxers – it may even be abandoned for the 2016 Olympics – which all but confirms that education, not prohibition, is the answer.