Brands are GREAT: British Brands Grow by Over £37 billion

The latest iteration of Brand Finance's Brands of British Origin league table shows that Britain continues to be a centre for marketing creativity and innovation, with the value of the top 50 brands originating from these shores increasing by £37.3bn since last year. That's the equivalent of creating a new brand that's ten times as valuable as Cadbury's or nearly four new Tescos. 50 additional brands have been included this year to bring the full list to 100, taking in iconic brands such as Jaguar, Twinings, Kit Kat, Asos and Royal Mail.

The most recent ONS statistics (released in January 2014) also show that the Advertising and Marketing Industry added £10.2bn in value to the UK Economy in 2012 by building the value of British and of the foreign brands in the UK market That's over £1m an hour in added value.

For the first time the Brand Finance study covers the top 100 British brands, not just the top 50. David Haigh, CEO of Brand Finance said "The £302 bn total value of the top 100 British brands stands as a testament to a thriving creative industry. Some brands like John Lewis may only operate here in the UK while others like Burberry or all our main telecoms brands have been exported around the world. Whether still owned by British companies or not, these brands should make Britain proud of its world-leading marketing industry, which is something we should continue to nurture and invest in."

The government's GREAT Britain campaign has been responsible both for highlighting the successes of British brands but also in building Britain's nation brand, givind brands of British Origin a platform to grow.

Conrad Bird, Director of the GREAT Britain campaign commented, "I am delighted to see British brands continue to grow in global stature.  This is a reflection of the creativity and quality at the heart not only of the brands themselves, but also their country of origin.

The GREAT Britain campaign's core message is that the UK is the most creative and innovative country in the world.  These results add further evidence to that claim: the UK is also a world leader in marketing and brand development.

The GREAT Britain campaign already works in partnership with many of the companies on the top 100 list to inspire the world to do business, visit and study here. For example, HSBC, PWC and Land Rover were headline supporters of the inaugural GREAT Festival of Creativity in Istanbul in May.  We also work with Mini and Burberry, as well as a range of smaller UK businesses who may become tomorrow's great British brands. These partnerships have helped the GREAT campaign tell a compelling story about all that the UK has to offer, and deliver jobs and growth for the UK economy.

I hope that the GREAT Britain brand itself will one day appear in this list, although it was only launched in 2012.    The campaign unites trade, tourism and education promotion of the UK under a single strong brand to deliver a bold and inspiring message about the UK and the strengths this country can offer the world.  It's a message that resonates around the world; the campaign generated £580m for the UK from its first year of activity and is now being used in 144 countries.

I am certain that we will continue to see the brands on this list grow in strength and value, and the GREAT campaign will continue to work with them to promote the UK and deliver real benefit to the economy."

The Most Valuable Brands of British Origin 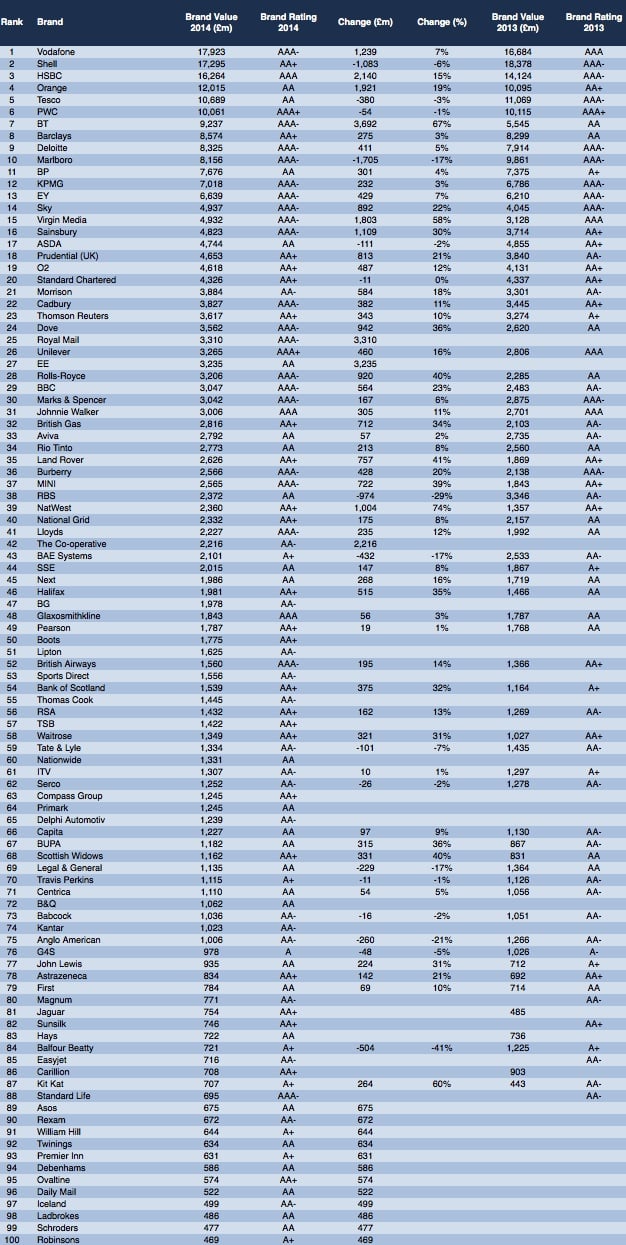 The Royal Mail is the most valuable new entry in this year's study, following its initial public offering in 2013. Brand Finance has valued the brand alone at £3.3 billion, which is as much as the Government valued the whole business at when it sold shares in the IPO last October.

This valuation is vindicated by the current share price implied value of the business (£5.1 billion) and the disclosure that JPMorgan had previously presented a spectrum for the value of the Royal Mail business ranging from £7.75bn to £9.95bn.

Perhaps one of the reasons for the Government's low opening share price was a failure to fully appreciate the value of having a brand as historic as Royal Mail. The 'Royal' element of the name is hugely valuable in its own right. Under the terms of the Royal Associations Agreement, the Royal Mail can use Royal Associations such as the Royal Cypher (the EIIR symbol) and the Royal Crown emblem.

David Haigh coontinues, "Royal Mail is an iconic and much loved brand thanks in part to its connection to the Monarchy, which is itself one of Britain's most valuable brands."

This year John Lewis celebrates its 150th anniversary making it among the oldest brands in Brand Finance's study. Its brand value has increased by 31% since last year, making it also one of the fastest risers. The partnership business model that John Lewis operates is rare, but this cannot be the only explanation for its success (other brands, notably the Cooperative, have not fared as well recently).

John Lewis is an example of an organisation that uses its brand to drive value from every aspect of its business. Shrewd marketing has allowed it to stay relevant to each new generation of consumers and also to retain life-long loyal customers.

Its 2011 Christmas campaign (by Adam & Eve and Manning Gottlieb OMD) was one of the most powerful campaigns of recent years and took the top prize at the 2012 IPA Effectiveness Awards, which reward campaigns that demonstrate their marketing payback. The campaign itself led to £1,074m of incremental sales and £261m in profits over a two-year period.

Since then Christmas campaigns covering Frankie Goes to Hollywood and Keane (and featuring Lily Allen) have maintained the success of the brand and propelled it towards the billion pound brand club.

BT's Brand Value is up 67% to a total of £9.2bn. This increase in value is a direct result of the creation of BT Sport, which has revolutionised the business model and changed the positioning of the BT brand.

BT Sport was set up almost overnight, acquiring all the TV rights and talent within a year and moving into Europe's largest purpose-built studio in the Queen Elizabeth Olympic Park. This bold move was a risk to the BT brand and to the business itself given the scale of the investment. BT has used several familiar broadcasting faces from the BBC mitigate this risk and to raise the profile of the service.

So far this new content-focused strategy, investing huge sums in Rugby and in particular Premier League football to challenge Sky, appears to be paying off. On the 8th May BT said it achieved its "best ever quarter in fibre" with 249,000 BT retail fibre broadband net additions. BT had originally set a 19 million premises target for the end of 2015, but said it reached it in March, helping the UK achieve "one of the fastest rollouts of fibre anywhere in the world."

Mini is another top performer in this year's table, rising 39% to £2.6bn. This is despite being owned and overseen by a German company (BMW). The strong performance of brands like Cadburys, and other car brands Land Rover and Jaguar (all of which are owned abroad) suggests that British brands need not necessarily be British-owned to be successful.

In fact many foreign-owned brands can end up playing upon their British heritage even more when they are exported to international markets. In the USA the Mini Cooper has recently been advertised using a British bulldog called Spike, while Jaguar has focused on the prevalence of British Hollywood villains.

Jaguar advert: It's Good to be Bad

Burberry is another brand that wears its Britishness on its checked sleeve. The brand uses young British international celebrities like Emma Watson and Romeo Beckham to promote its iconic trench coats around the world. The Burbery brand has had a good year, growing by 22% to £2.6bn.

The brand is currently attempting to shake up the fragrances market, ending a two-decade relationship with Interparfums SA, creating an in-house division to manage suppliers and retailers and selling products through Amazon (as well as opening its own boutique stores).

Angela Ahrendts has left as CEO (for Apple) to be replaced by Christopher Bailey on the 1st May. Bailey aims to grow the brand, especially in Japan where 60% of Burberry's £109m in licensing income currently comes from.

The Johnnie Walker whisky brand is worth £3bn, making it the most valuable whisky brand in the world. It is an iconic Scottish brand, but also truly global, with more than 1m cases sold in the US, Brazil and Thailand and a London-based parent company in Diageo. The brand's strong march into emerging markets can be seen in the decision to launch the John Walker & Sons Private Collection by master blender Jim Beveridge in Singapore, and also in recent advertising campaigns in countries like Mexico.

While Johnny Walker could be walking out of this study and off to independence in September, along with the other Scottish brands in our table, the Striding Man will still remain an excellent example of British and Scottish brand-building.

Johnny Walker advert: The man who walked around the world