Brazil’s economy grew by 2.7% last year compared to the UK’s growth of just 0.8% and, as a result, the South American country overtook the UK to become the world’s sixth largest economy.

Brazil managed to raise its GDP for 2011 to Â£1.56 trillion, whereas the UK managed to come in just a little lower at Â£1.53 trillion.

But just to put this into context. This is not a picture of a high flying Latin American powerhouse soaring past a limping and bogged down UK economy. Just look at how Brazil’s economic growth has slowed from 2010s very respectable 7.5%.

Recently Brazil’s economy itself has been called the ‘halting flight of a chicken’ when compared to China’s condor like flight.

It is also reported today that Brazil is expected to cut its interest rates from 10.5% to at least 10% to boost the economy on the back of disappointing economic data.

There is also the matter of size.

Brazil is the world’s fifth largest country with an area of about three and a quarter million square miles and a population of some 192 million. This compares to the UK’s 243,610 square mile area and population size of 62 million.

So, with an almost equal GDP when comparing countries, the GDP per head of population is vastly different, with Brazil’s being about a third of the UK’s. On that basis the South American country has a long way to go. 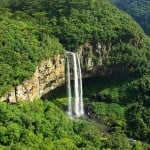 Guido Mantega, Brazil’s finance minister, did play his country’s performance down. “It is not important to be the world's sixth-biggest economy, but to be among the most dynamic economies, and with sustainable growth.” He said.

The Centre for Economic and Business Research said that this was a natural progression for Brazil given its size, population and access to natural resources.

A UK government spokesman said that this showed why the UK was right to set up economic ties with emerging economies like Brazil.

Investor Confidence Rises in March by 4.2 points to 95.4