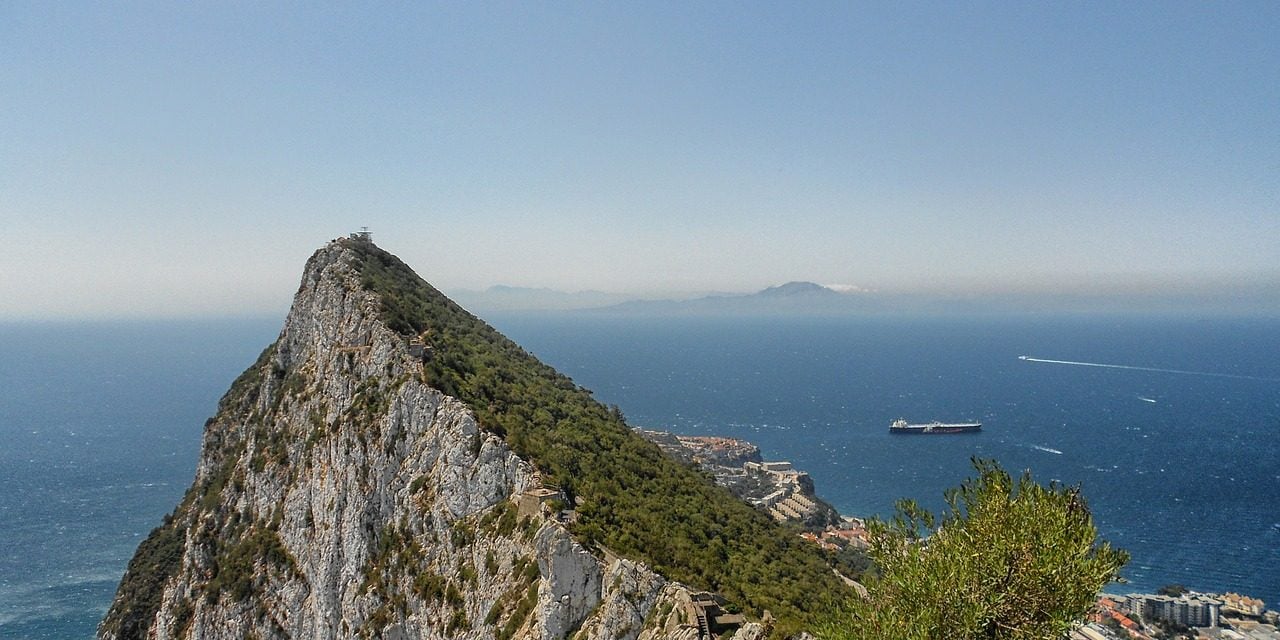 Spain is not completely happy with the withdrawal proposals as Gibraltar has not been ruled out of the deal.

While Theresa May extols the virtues of the Brexit In Name Only Withdrawal agreement to the CBI and Michel Barnier mops his brow with relief that he has 'broken Britain', the Spanish are, it seems, not so pleased.

Bloomberg reports that Madrid wants it made clear in the text, specifically Article 184, that this agreement does not apply to Gibraltar!

"We want to make sure the interpretation of this text is clear and shows that what’s being negotiated between the EU and the UK does not apply to Gibraltar."

The Spanish of course want to be able to lever as much out of the UK regarding Gibraltar as they can and want the whole EU to back them up in doing this.

The EU does want to extend its territory as much as possible so would in the past probably have been quite content to give Spain the room it needs to manoeuvre here.

But Michel Barnier has already said that the text is now not up for re-wording. Let's see how long that lasts in the face of Spanish threats to derail it.

But a quick look at the draft withdrawal agreement shows just how woolly the wording on the status of Gibraltar, amongst other UK interests, is and Spain wants it to say unequivocally that the UK must come to an agreement with Spain over the future of Gibraltar as part of the deal. i.e. no UK concessions to Spain on Gibraltar, no deal!

And coming on the heels of reports that the EU Commission General Secretary, Martin Selmayr, boasted that "Losing Northern Ireland is the price Britain has to pay for Brexit", I know exactly what my answer is to both that and the Gibraltar issue!

So it turns out that Theresa May was not bullied by the EU into having to accept a UK-wide customs union then.

Despite assuring us we would be leaving the customs union as well as giving Corbyn a hard time over wanting to stay in a customs union with the EU, it turns out that according to the EU chief Brexit negotiator Michel Barnier, it was Mrs May who offered it up as a solution. Now that's not going to go down well in Brexiteer circles is it?

Meanwhile Boris Johnson has been penning furiously in the Telegraph about Theresa May's proposed deal saying it will make us EU captives.

"We are preparing to take colonial rule by foreign powers and courts. – he writes – We are handing over colossal sums of money for nothing. We are giving up the hope of new free-trade deals. We are giving up the right to vary our laws. We are betraying Leavers and Remainers alike: we are poised to abandon any UK influence in Brussels, and yet we are signally failing to take back control."

Boris has a great way or organising words on paper, but we need to see organised action to prevent this from ever happening and with the Tories being too lily-livered to submit their letters of no-confidence in order to try and save the nation, then what good are they.

Anyway, the press is now starting to lay Theresa May's premiership to rest – with the Express and the Guardian both running pieces about who will be replacing her.

The Guardian starts off with Dominic Raab as the Brexiteers' favourite, then Boris Johnson followed by Michael Gove, Amber Rudd, Jeremy Hunt, Sajid Javid and Penny Mordaunt. But no Jacob Rees-Mogg.

Now, remember that if the Tory MPs can whittle the list down to one, then they will have selected their new leader without going to their party members. Otherwise they get it down to two names for the membership to choose from.

Now I've got to say that, with Tory MPs being in the main pro-EU, you have to wonder if they would not try to make sure one of their own is selected. To many of them, the Brexiteers at the top of those newspaper lists may be viewed as the rebels or even toxic – including those that were supposedly late 'converts' to the Brexit cause.

And many Tory MPs are worried about nothing more than keeping the Tories in power. So anyone coming forward promising to mend the party and get it back on track with its grassroots Conservative Party members and supporters, will be welcomed with open arms – especially, in my view, if they are seen to favour a soft and fluffy or even non-existent Brexit.

We might just get a surprise on that one, should it occur.

Finally, on a non-Brexit related topic, one release from the Office for National Statistics surprised me a little and that was the quarterly figures on conceptions to women under 18 in England and Wales.

Over the years we have had the occasional spate of news about increasing numbers of young girls living in free flats on the social with loads of babies and how awful it all was etc. But I must admit to not seeing a report on it recently.

And the reason may well be shown by this graph. 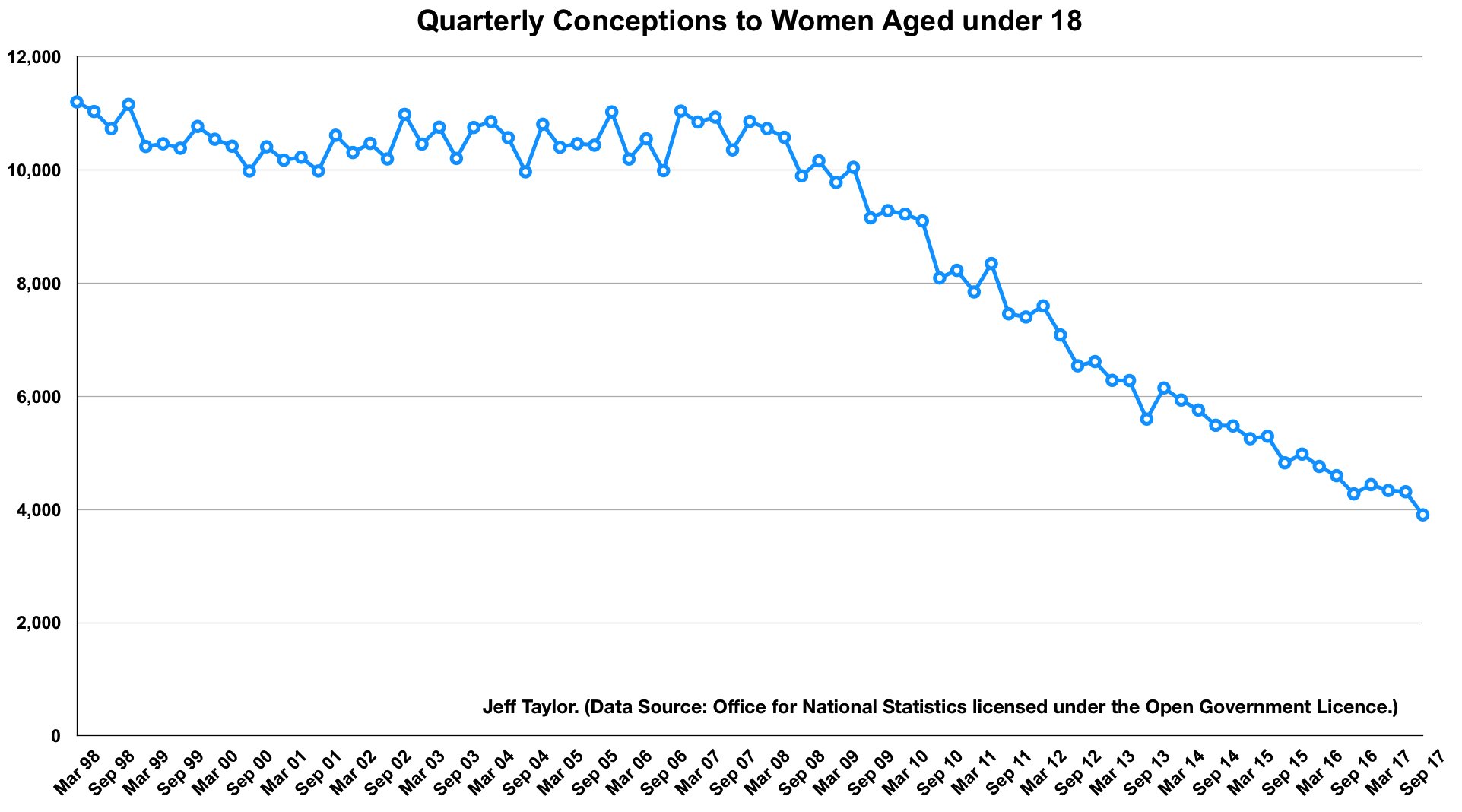 As you can see the number started falling at the start of about 2007 or 2008 and has been declining at a remarkably steady rate ever since.

Now whether that is down to things like better birth control awareness, increased celibacy, better overall education, falling fertility in males or females, or both, or some other external factor is not mentioned. It may also be connected to recent reports of the falling Total Fertility Rate (TFR) across the world.

Don't listen to the hype, it has been known for quite some time that the global population is not increasing exponentially, it is beginning to level off and could well start falling in the next few decades. Already half the countries in the world do not have enough babies to maintain their own populations.

And this will hit economies hard as there are fewer young people to pay for an ageing population, which may explain the scramble by the west to import as many people as possible – but surely the sensible answer is to stabilise our own birth rates.

Anyway, I just thought it worth bringing the ONS data to your attention, for the next time we hear stories about all those hordes of irresponsible young mothers.

According to Sunday Times, Raab was told that Martin Selmayr, boasted: "Losing Northern Ireland is the price Britain has to pay for Brexit." A disgraceful & disturbing comment which highlights the arrogance of unelected EU bureaucrats. May's betrayal deal will make that a reality pic.twitter.com/9PP9Trb6ev 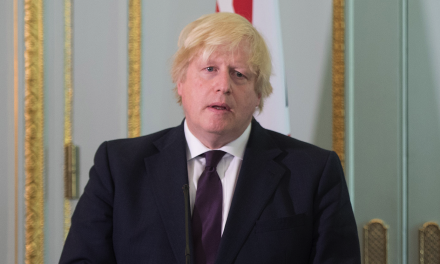 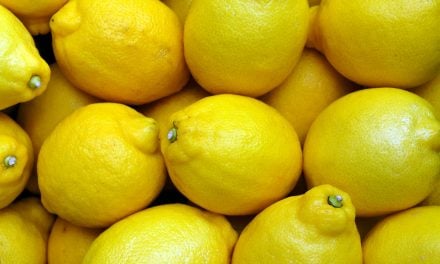