Writers: Rowan Joffe (screenplay based on the novel by Graham Greene)

Lush adaptation of Graham Greene's thriller as local teenage mobster and killer Pinkie (Riley) closes in on naive waitress and witness Rose (Risborough) with a view to marriage and saving his neck from the hangman's noose.

Justice comes in the form of the morally upright and aging Ida (Mirren), who sets out to uncover the events surrounding the local killing and to persuade Rose to testify against the hoodlum who represents not only her first love but a slide into moral ambiguity.

'Hale knew, before he had been in Brighton three hours, that they meant to murder him.'

The opening lines from Greene's novel are perhaps the best ever committed to a thriller and any new adaptation also has to live with influence left by Richard Attenborough's master class in how to portray cold ruthlessness as displayed in the original 1947 adaptation.

Perhaps hoping not to live in the shadow of that classic Joffe has moved the timeline to the dawn of the 1960's thus giving the film a slight whiff of Quadrophenia (1979) with scooters, mods and rockers all gracing the screen in a rich recreation of time and place.

Elsewhere, the sense of noir is provided by seriously dark images of rolling tides and an almost crushing score that threatens to smoother the plot and the actors with the acid bottle climax becoming almost over the top and ghoulish.

In terms of creating an atmosphere Joffe's adaptation deserves top marks but does the human element which so drives Greene's story survive?

This adaptation fundamentally changes the background to Ida thus giving here a direct link to Rose which some may disagree with but from a plot perspective streamlines the film. Mirren is very good as the moral avenger disgusted by the actions of the teenage Pinkie and determined to save Rose from life of corruption.

Less successful is the portrayal of Rose which seems too naive and at times extremely cartoonish when compared to the stronger and more morally interesting character of the book.

Elsewhere, the moral conflict which is represented by Catholicism in Greene's story is played down and mainly restricted to Rose. Herein lies the major departure from the book?

In Greene's novel there is a major contradiction between Pinkie the Catholic with an almost asexual and sterile outlook on life and the Pinkie who will stop at nothing to climb the ladder of Brighton's underworld. Without the focus of the former, the new interpretation is merely a cold blooded thug at odds with society. 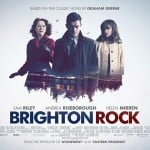 But Riley delivers, menacing the screen with his presence and dissatisfaction with the lot that life has dealt Pinkie. His use of the knife and the infamous razor blade are truly chilling and along with Mirren adds weight to the film.

Overall, Brighton Rock (2012) just about succeeds with some lavish visuals, atmosphere and great turns from Riley and Mirren. But elsewhere the film strips too much away from the book and steers very close to becoming just another British mob/detective flick.

The Borgias – the original family from hell