Britain, a nation divided and conquered

The Eurozone is in meltdown with the distinct possibility that this will lead, at a minimum, to another recession, which may well spread to the world but all our attention is focussed on a battle between the private and public sector workers.

In a very successful move our general attention has been diverted away from the true culprits and causes of our current economic woes and the ordinary people on the street are now eyeing each other as potential scapegoats.

Yes, the public sector is built on the shifting sands of public debt, but many private sector companies and individuals also over-borrowed and rode on the coattails of the Labour ‘forever boom’ dream.

And in return the public sector workers accuse the private sector of not understanding how hard they truly work and what they really get in wages and pensions in return for their sacrifices.

And, in the background, virtually unnoticed, fat-cats continue to earn vast sums, use tax loopholes and award themselves huge salaries, bonuses and expenses.

We now have a situation where ordinary workers are accusing each other of not being ‘in it together’, forgetting that it is really the rich that are not in the life-boat with them. The wealthy ones have already been transported by Sunseeker to sunny, sandy beaches with a parasol over their heads and one in the cocktail that has just been served to them.

The public sector workers have taken the only action they can to try and address their situation. But, and it’s a big but, the private sector workers (especially the self employed) do not have this type of escape route. For them going on ‘strike’ means a direct impact on their own bottom line or that of their employer, neither of which in the main deserve to suffer. They have no choice but to go on working.

But, because their employer and wage payer is normally the government, the public sector worker arguably therefore has a political ‘voice’ via the strike that the private sector does not have.

This is the point that should upset private sector workers. The political system has not given them a proper route to express their anger and it has been misdirected at public sector workers, who are just using the tools they have been given to make their feelings known.

And the political parties are shamelessly using this for their own short term aims. 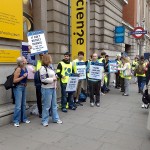 But now comes the hard truth. The ordinary people in the street have brought this on themselves. They have now got the politicians and system they deserve by not taking a proper interest in the state of the nation. By just generally voting for red or blue over the decades because parents and grandparents did is not political participation. While the ordinary Joes and Joesses are being ‘too busy’ making a living, the fat-cats are busy running off with the wealth. Maybe being more involved, asking the right questions and voting for people they know and trust will allow people not to need to be so busy just eking out a living.

Everyone who says ‘I don’t do politics’ can wear a reduced pension and a subsistence wage as far as I am concerned. Be in no doubt that the rich ‘do politics’ very successfully at others’ expense. And all those that cast aspersions at the public sector workers for taking action should be thinking about how they can make a political statement and ‘do politics’ for their own gain.

A good start would be to vow to never again vote red or blue and find a political party they really believe in, or maybe start one of their own.

As ever the battle is not between the public sector and the private sector; it is between worker and wealth stealer.

Picture by Frankie Roberto from Manchester, UK (On the picket lineUploaded by Edward) [CC-BY-2.0], via Wikimedia Commons

How valid are the Bank of England's latest inflation assumptions?

Landlords caught between a rock and a hard place